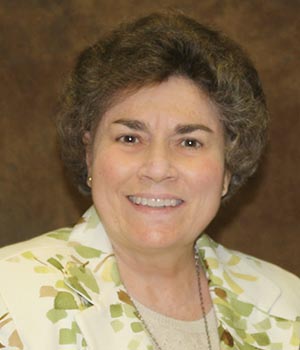 Sister Sharon Ann Mihm, CSC, was born in Washington, D.C. Although an only child, Sister Sharon Ann grew up with her cousins from her mom’s side of the family, as well as her dad’s. They were a very close family and her parent’s example taught her to be kind and respectful of others.

Family, Sundays and prominent holidays were very important, and hospitality was a trait and practice handed down to her. Every Sunday morning after Mass, Sharon Ann and her dad and mom had breakfast with her paternal grandparents. Later the same day, her maternal grandparents hosted supper for all the grandchildren, their five daughters and spouses.

Her paternal grandparents also hosted Thanksgiving dinner. After her grandmother passed away, her mom and dad hosted the traditional holiday meal at their home and all her paternal relatives were invited. It was wonderful childhood with parents who expected that she would always display proper behavior.

Sister Sharon Ann made her initial profession of vows with the Sisters of the Holy Cross on August 15, 1970, and her perpetual profession on August 6, 1975. She came to the Congregation shortly after earning her Bachelor of Arts degree from Dunbarton College of Holy Cross, Washington, D.C., and began teaching in South Bend, Indiana, as a postulant and as a novice at Saint Mary’s Campus School. Her teaching ministry took her on to North Carolina, where she taught for three years at Our Lady of Lourdes School, Raleigh, and served as principal of Immaculata School, Durham, from 1983 to 1992. She also taught for nine years at Holy Trinity School, Norfolk, Virginia, and for 16 years she served as principal for several schools in the Archdiocese of Washington, including Holy Cross School, Garrett Park, Maryland, and St. Martin of Tours, Gaithersburg, Maryland, where she served from 2005 to 2013. Since 2014, she has worked in the Spiritual Care Department with Holy Cross Health, Silver Spring, Maryland.

Send Sister Sharon Ann a note, prayer, poem, photo, favorite memory or message using the button below. They will be collected on kudoboard.com and presented in both a slideshow and Blessing Book for her to enjoy. The deadline to be included in the printed book is July 22, 2021.

I enjoy photography, making movies, and designing greeting cards for various occasions using digital technology. I also, on occasion, like to go out to share a meal with friends.

I especially liked being a principal! It was gratifying to empower teachers to integrate 21st- century strategies into the teaching/learning process. Seeing them grow as well as the students was energizing!

Immediately upon the completion of my sabbatical, I began a new phase of my life.  I am currently in ministry with Holy Cross Health. I minister in the Spiritual Care Department serving patients in the Mother and Baby and Acute Care units.

While at Dunbarton College, I had the opportunity to go to Truchas, New Mexico, with two Holy Cross sisters. This village is approximately 42 miles northeast of Santa Fe and is in an extremely poor area in the Rocky Mountains. My ministry was to prepare the students for their first reconciliation and first Communion. It was during my six-week stay with other students and the sisters that I was introduced to stories about Father Basil Anthony Moreau. Before I left Truchas, I decided to enter our Congregation the following year after graduation.

In 1993, I was selected to go on the Moreau pilgrimage trip. This opportunity enabled me to learn more about Father Moreau and to walk in his footsteps. It was a trip that I will never forget!

Music from Broadway shows and the music of the 1950s!