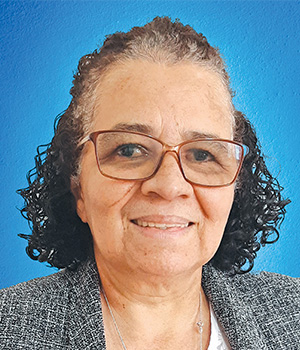 Sister Maria de Lourdes de Deus Pimentel was born in Entre Rios, Bahia, Brazil. She has four brothers and three sisters. A brother passed away in 2021. I am very proud of my family for being a united family and joyful,” she says. “My parents taught us that the best gift they could give us was affection, respect, honesty and love. I believe that these values express who I am. I am in love with my family.”

Sister Maria made her initial profession of vows on February 2, 1997, and her perpetual profession on January 13, 2002. Before entering the Congregation, she was a pastoral agent for her parish.

After entering the Congregation and while attending university, Sister Maria continued to serve her parish, ministering to youth groups, training catechists, directing the formation of lay people, and leading reflection groups for women and youth. From 2005 to 2012, she took on a new ministry in the city of Janaúba, Minas Gerais, helping to organize social promotion plans, while also assisting the Santo Afonso de Ligório Parish.

From 2014 to 2016, she took responsibility for the social service aspect of the Instituto das Irmãs da Santa Cruz. She also started working with a group called Pastoral da Mulher Marginalizada, part of the social pastoral sector of the National Conference of Bishops of Brazil. With this group, she accompanies women in situations of prostitution and social vulnerability. Sister Maria also assists with vocation activities for the Congregation and serves on the board of directors of Rede Rua, an organization that assists people living on the streets.

Since 2019, Sister Maria has served as the Congregation’s candidate director in Brazil.

Every moment in ministry is of great importance because it is always a construction of relationship, trust, sharing of knowledge. At the moment, I am involved in the following ministries: pastoral care for women in vulnerability, homeless people and vocation ministry. In the women's ministry, I develop moments of reflection, listening and orientation according to the situation. With the homeless population, I help in the distribution of food. In the vocation ministry, I carry out visits, meetings and help in the discernment process.

I have a passion for everything I do for the good of the people. I really like the ministry with young people in vocation promotion.

All the dioceses in which I had the opportunity to exercise my ministry were significant in my life. More, I want to highlight the Diocese of Janauba–Minas Gerais. It was nine years of experience and sharing with a very hospitable people and of a deep religiosity and commitment to the Gospel of Jesus. It was nine years of community and fraternal experience together with families and leaders, teaching and learning the feeling of synodality, of the deep and true Gospel of Christ. I had the opportunity to accompany and guide several pastorals, such as youth ministry, catechesis, liturgy, groups of elderly people. All these pastorals touched my heart, as they touch the hearts of every leader. I am grateful to God for this prophetic experience.