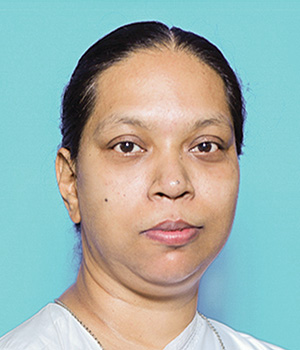 Sister Linda Veronica Gomes, CSC, was born in Kishoreganj District, Dhaka, Bangladesh. Before entering the Congregation, she was a student. Of her family, she says, “We are three in number. I have an elder brother and a younger sister. I am the second child of my parents. After my brother, as the first girl of the family I got much attention from my parents. My parents died before I joined the Congregation, but my brother took care of us as an elder brother should do. We have a strong family bond though my sister, who is also living in the U.S.”

She began her ministries in 1998 as a junior high school teacher in Lokhipur, Kulaura, Bangladesh, through June 2000. During this time, she also was responsible for the Young Christian Students Movement, church liturgies and women cooperatives. In 2001, she conducted pastoral ministries and taught school in Jalchatra, Tangail, Bangladesh. Following her university degree, she moved to Jalchatra, where she was involved in parish ministry and teaching in primary schools. Currently, Sister Linda Veronica is a teacher for grades 6-10 at Corpus Christi High School, operated by the Sisters of the Holy Cross, in Jalchatra. She has been in this ministry, which includes visiting members of the community and holding prayer groups for young girls and boys, since 2003.

My favorite activities are reading and listening to music. I like knitting also.

My favorite time of ministry was when I was in Neerala Convent, Lokhipur, Kulaura. I was involved in teaching, going for pastoral ministry on weekends, and participating in different activities. My sisters’ support, encouragement and strong bond in the community helped me to share my life more enthusiastically.

My memorable area is Lokhipur, Kulaura, as I enjoyed ministering there.

My favorites are Rabindranath Tagore songs and I also like soft music with bamboo flute.

During her time in ministry, Sister Linda Veronica has served in the Sylhet, Dhaka and Mymensingh dioceses.

Share a note of good wishes or a memory