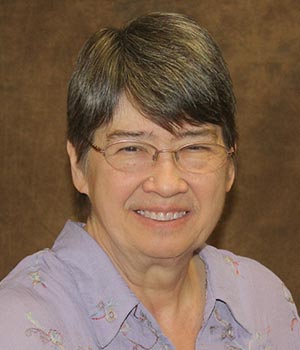 Sister Linda’s father and mother were loving people in a very quiet way. She recalls that her dad always said her mother taught him the good parts of himself. She adds, “I think that this expresses what we are together: We learn the good things in life from each other.”

Sister Linda has one sister and one brother. Her sister Pat is a couple years younger and brother Tim is 10 years her junior. Pat has one son, who is married with two children. Tim has three children; one is married.

Sister Linda Kors made her initial profession of vows on August 15, 1970, and her perpetual profession on August 3, 1975. She began her ministries as a technician at St. John’s Hospital before receiving her degree from Indiana University-Purdue University Indianapolis, Indiana, in 1974. Over the next several years, she served as a therapist in Ohio, Idaho and California, and worked as an occupational therapist at Saint Joseph Medical Center in South Bend, Indiana.

She returned to school to obtain her master’s degree and then served in ministry at Mundelein College for the following six years. Over the next three decades, Sister Linda served in a variety of rolls in Rensselaer, Indiana, for six years, and more prominently, in South Bend, Indiana, for 24 years. During that time, she was the coordinator of Volunteer Services at Saint Mary’s College, project director for REAL Services, and executive director for Forever Learning Institute. She currently serves as a long-term care ombudsman for REAL Services.

Send Sister Linda a note, prayer, poem, photo, favorite memory or message using the button below. They will be collected on kudoboard.com and presented in both a slideshow and Blessing Book for her to enjoy. The deadline to be included in the printed book is July 22, 2021.

I enjoy music, arts and crafts.

I’ve liked all my ministries without one favorite. I knew that each one was helping people be the best they could be physically, spiritually and in giving of themselves. Currently, I am a long-term care ombudsman in Indiana.

I took students to three places in Appalachia and met various people from the areas where sisters minister. We  shared many stories and provided service to the local communities there, along with a little clogging and visiting local families and making friends. I also went to Brazil with students and learned about the various cultures and base communities in two areas of the country. I saw one of the most beautiful waterfalls in Iguacu, Argentina. In Monterrey, Mexico, a group of students and I shared with the sisters their concept of parish and community. One of my other experiences was traveling around Uganda after Chapter, where I was able to see the many places that we hear about during our gatherings in the United States.

I like most genres—especially if you can sing along in the car!