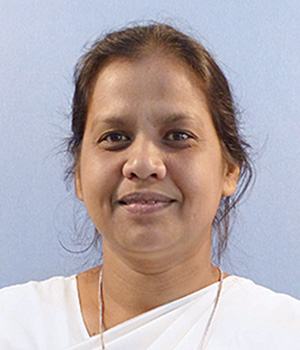 Sister Joyce Rozario was born in Tiria, Nagari, Gazipur, Bangladesh. She was raised by her father, Edward Rozario, who died on March 3, 2014, and her mother, Lucy Mary Rozario. In her family, there were seven brothers and sisters, including her twin, Sister Joya Rozario, who is also celebrating her silver jubilee this year. Together, the twins have two brothers, Ronjit and Ajit, and three sisters, Momota, Mina and Runa, who is the youngest.

Sister Joyce’s elder brother, Ronjit, and youngest sister, Runa, are both living in Maryland in the United States. Her brother Ajit lives in Italy with his family, and her sister Mina lives in Spain with her family.

Sister Joyce made her initial profession of vows on December 6, 1996, and her perpetual profession on October 11, 2002. Before entering the Congregation, she was a student. Sister Joyce spent a year in parish ministry at Corpus Christi Church in Jalchatra, Tangail, Bangladesh, before moving on to a formation ministry for the Congregation in Dhaka, Bangladesh. From 1996 to 2001, she taught at Holy Cross Girls’ High School in Dhaka and Nirmola Education Center in Kulaura, Moulvibazar, Bangladesh. The next four years she was a student in Bangalore, India. She then ministered at the Congregation’s Sewing Center and Cooperative in Jalchatra, Tangail, Bangladesh. Six months in pastoral care at St. Anthony of Padua Church in Bakshanagar, Dhaka, was then followed by four years as a student. Before her present ministry, Sister Joyce directed and taught at a girls’ hostel and served in parish ministry with Saint John’s Catholic Church in Parachara, Khagrachari Hill Tracts, Chittagong, Bangladesh. She currently is a teacher at the National Social Catechetical Training Centre, Jashore, Khulna, Bangladesh.

Send Sister Joyce a note, prayer, poem, photo, favorite memory or message using the button below. They will be collected on kudoboard.com and presented in both a slideshow and Blessing Book for her to enjoy. The deadline to be included in the printed book is July 22, 2021.

I received my Bachelor of Arts in Bangalore, India.

My favorite ministry is working with people who are in need. Currently, I am in the National Social Catechetical Training Center, Jashore, Khulna Diocese.

My most memorable time:

My most memorable time is when I was at Bangalore in India, where I completed my degree. I enjoyed the four years of study with students from different cultures.