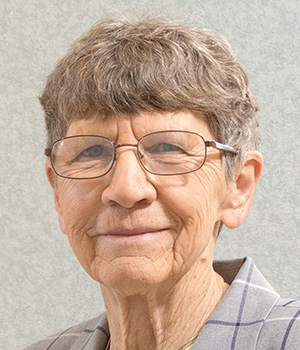 Sister Joy O’Grady, CSC, was born in Battle Creek, Michigan, and moved with her family to Ventura, California. She is the fifth of seven children (two older brothers, one older sister, two younger brothers); one brother and two sisters are deceased.

Sister Joy made her initial profession on August 15, 1972, and her perpetual profession on July 30, 1977. Prior to entering consecrated life, she was a student and ward clerk at Holy Cross Hospital, Mission Hills, California.

While obtaining her graduate degree in clinical social work from the University of Michigan, Ann Arbor, Sister Joy ministered in pastoral care at St. Joseph’s Hospital, South Bend, Indiana. Upon graduation in 1980, she began ministry at Oaklawn Psychiatric Center in Elkhart, Indiana, where she served as a therapist and team leader through 1982. In 1983, she opened a private family counseling practice in South Bend.

Between 2009 and 2014, Sister Joy served as a facilitator for leadership teams of various religious congregations around the United States. In 2014, she was again elected as Area Coordinator, this time for the Area of North America, which comprises ministries in Mexico and the United States. Also during this time, Sister served as a trustee on various hospital boards of Trinity Health, Novi, Michigan. Currently, Sister Joy serves on the Mount Carmel Health System Foundation Board, Columbus, Ohio, and on the consultation board for a new Congregation ministry called SOAR (Sisters Organizing and Advancing Recycling) in Ghana, West Africa.

She has been in her current position as a psychotherapist in private practice since 2019 and also conducts national and international workshops in conflict management, Myers-Briggs Type Indicator, self-esteem and communication.

I love to garden and hate to knit. I love almost anything outdoors—playing, praying, working.

I have loved all my ministries. I worked in pastoral care in hospitals from 1974 to 1980. I was the department head at Oaklawn Psychiatric Center from 1980 to 1983. And I have been in a private counseling practice since 1983.

Formation, but the story is much too long to publish here.

My music tastes are very eclectic. I like all types except rap and hard rock.

Sister Joy has served in the Fort Wayne-South Bend diocese since 1980.

Share a note of good wishes or a memory