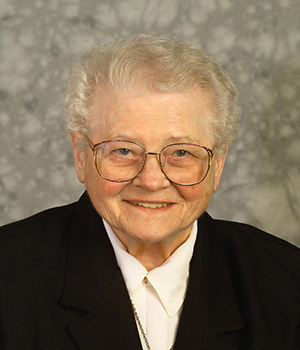 Sister Dorothy Ann’s life and ministries by reading the memories shared at her funeral.

The Sisters of the Holy Cross are practical women, who live in the present moment, yet plan for the future. Sister Dorothy Ann left instructions circa 2004: “Please make my funeral a joyful occasion with lots of love and laughter. Thank you very much. Love to all.”

At that time, she was volunteering as a bookkeeper and treasurer for various convents at Saint Mary’s and the Holy Cross History Association. Not until 2008 did Sister Dorothy Ann fully let go and “retire” at Saint Mary’s Convent, Notre Dame, Indiana where she died nine years later at 95 years old during the second week of the Easter Season.

Dorothy Ann Reppen was the fourth of the ten children of Joseph Reppen and Aurelia Morrissey. Her brother Robert was a Norbertine priest and her younger sister Judith was also a Sister of the Holy Cross, Sister M. Margaretta. Sister Dorothy Ann was the last of her siblings, but celebrated her extended family of nieces and nephews.

The Wisconsin native spent her ministry in elementary education from 1942 to 1977, as a teacher and principal in Catholic parish schools throughout the American Midwest in Illinois, Indiana and Iowa. The names of the schools are a Litany of Saints: St. Joseph’s, St. John’s, St. Mary’s, St. Peter’s, St. Thomas the Apostle, St. Vincent de Paul, and Christ the King. She was known to be strict, but loving.

Her precious school years ended and she began a 15-year ministry with Renew, Inc. in South Bend, Indiana. The non-profit organization was chartered to provide low-income housing through the rehabilitation of existing housing. Volunteers refurbished homes and made them affordable. The goal was eventual home ownership. Sister’s role as assistant director and bookkeeper for Renew, Inc. was very satisfying for her. When she left in 1993, the non-profit had begun to explore low-income housing for the disabled.

Sister Dorothy Ann described herself as a people person who was a wonderful friend to many. Per her instructions, please remember her now with love and laughter. She thanks you.