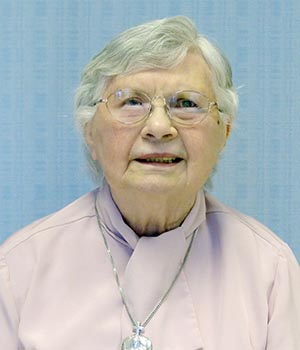 Word has been received of the death of Sister Colette Marie, CSC, who died at 7:15 p.m. on December 20, 2018, in Saint Mary’s Convent, Notre Dame, Indiana. Sister Colette Marie entered the Congregation from Columbus, Ohio, on January 30, 1949. Her initial profession of vows took place on August 15, 1951.

The season of Advent marked the beginning and the end of Sister Colette Marie’s life in community as a Sister of the Holy Cross.  Ruth Lang was 23 years old in early December 1948 when she made her first inquiries about entering the convent.  Her father Joseph Lang, a railroad employee, had died.  She lived with her mother, Anna Fagan, and Ruth’s older sisters, Jane and Helen, and brother Robert. Ruth was a clerical worker for over five years at an auto insurance company in Columbus, Ohio, but was ready “to seek the best way of life,” as a Catholic sister.  The slowness of the Christmas mail and other difficulties intervened. Yet she persisted over two months, worried that the proper forms would not be filled out in time for her to enter the doors of the novitiate at Saint Mary’s, Notre Dame, Indiana, by January 30.  She was in a hurry but wrote to Mother M. Constantine, “It seems a strange confusion and conflict reign in a person’s mind when she attempts a change. Only the grace of God can overcome these things….”  In the 70th Advent since her anxious preparation to enter Holy Cross, Sister Colette Marie having lived, loved, and served God as a woman religious, waited no longer.  Jesus Christ met her at the gate and opened wide his heart to her for all eternity.

Before her death at Saint Mary’s Convent, Notre Dame, Indiana, Sister Colette Marie had nearly 58 years of a rich and varied background in ministry.  She served in Catholic parish elementary education, teaching mostly first and second graders, and as a principal.  At Our Lady of Lourdes Parish, Bethesda, Maryland, as religion coordinator, Sister Colette Marie prepared hundreds of youngsters for their First Holy Communion.  She would bring the children out to the school lobby where she would sit with them on a bench, quietly sharing stories and prayers with them. Sister also gave special attention to those who needed academic help or encouragement in speaking English. Sister earned a B.A. degree in elementary education in 1963 from Dunbarton College, Washington, D.C. and an M.S. degree in guidance and counseling in 1975 from Loyola University, Baltimore, Maryland.

After years of ministry in Pennsylvania, Texas, Virginia, New York, Maryland, and Washington, D.C., sudden serious illness brought Sister Colette Marie to Saint Mary’s in 2008. In her last years, she ministered through her prayerful, silent presence since communication was difficult for her. Her positive spirit and her warm and gracious personality continued to shine through, despite the challenges of her illness.  Since then, her friends who shared their novitiate with her, have been devoted to her care as have the rest of her Holy Cross family and staff at the motherhouse.  In 1968 Sister wrote of her future, “I would like to think that I could still figure in the lives of others through Christ and his message, no matter what I do or what method or structure.” Aides who assisted her said Sister found her voice suddenly when responding to music and song.  At the news of Sister’s death, one of her companions said, “God bless, Colette! She deserves to sing in heaven.” 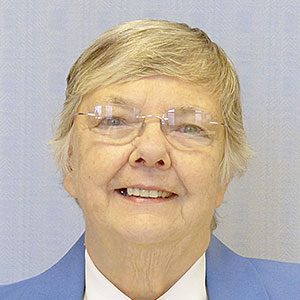