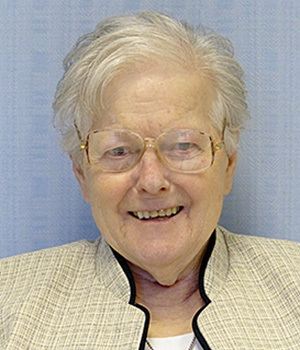 Sister Irene Marie (Mercier), CSC, was born in Hastings, Nebraska, as Phyllis Ann Mercier, the older of two girls born to Irene LaPorte and Raimond Mercier in the new year of 1929. The parents were long-lived. In August 1983, Sister Irene Marie moved to the Denver, Colorado, area to assist her sister Priscilla, Mrs. William Jeffers of Englewood, in the challenging care of their parents, who were in their early 80s. Their father and mother died in 1990 and 1995, respectively.

While caring for her parents, Sister Irene Marie printed in her own hand a two-page autobiographical summary which offered a few details on her life prior to the convent. “My earlier education as a child was in public schools since we lived in small towns in Nebraska where there were no Catholic schools.  Catechism classes by the priest, my mother’s instruction and vacation school with the Ursuline Sisters from Louisville, Kentucky, provided me with my religious training. From eighth grade up to the 12th grade in St. Patrick’s High School in North Platte, I completed my education and graduated in 1946.  From 1946 to 1949 my work experience included being a long-distance telephone operator, laundry worker in a Catholic hospital, a clerk in a dime store, a soda fountain worker—and a lot of babysitting.”

At 20 years old, she entered the Congregation of the Sisters of the Holy Cross in 1949, giving as her only motivation, “To acquire humility and unselfish service to God.” And it was unselfish service that Sister Irene Marie gave as an elementary teacher in Catholic schools in the Midwest from 1951 to 1976. Sister taught in nine different schools in Indiana and Illinois, serving at each for one to four years at a time. In the old days, it was considered good training to move the younger sisters around frequently. The list of schools is a veritable Litany of the Saints: St. Mary (Woodstock, Illinois), St. Vincent de Paul (Logansport, Indiana), St. Michael (Plymouth, Indiana), Christ the King (South Bend, Indiana), St. Patrick (Danville, Illinois), St. John (Peoria, Illinois), Queen of All Saints (Michigan City, Indiana), St. Martin (Chicago, Illinois) and twice at St. Theodore (Chicago, Illinois). Sister Irene Marie had an elementary lifetime teacher certificate in the State of Indiana, having earned her bachelor’s in education at Saint Mary’s College, Notre Dame, Indiana in 1967 and a master’s in education at Saint Francis College in Fort Wayne, Indiana in 1973.

From 1976 to 1985, Sister Irene Marie headed east where her life began to take a more pastoral turn, ministering to the elderly in parishes in Alexandria, Virginia, and Lancaster, Pennsylvania. In late 1985, Sister began serving as a hospital chaplain, first in Alexandria, Virginia, through 1988. To assist with the care of her parents, Sister Irene Marie relocated to Denver, Colorado, to continue as a chaplain, and later to nearby Littleton through 2005. She said that hospital ministry was a blessing for her because of her outgoing personality, sense of humor, and an ability to have people feel comfortable around her. “I am a good listener and this ministry is about listening to stories and telling stories. The patients and I are traveling together on a journey to God.” Sister moved to the motherhouse in 2006, volunteering as needed until late 2008. Since then, she was devoted to a ministry of prayer at Saint Mary’s Convent, Notre Dame, Indiana, where she died, listening to the prayers of her sisters sending her to God. Sister Irene Marie had lived a life of humility and unselfish service.