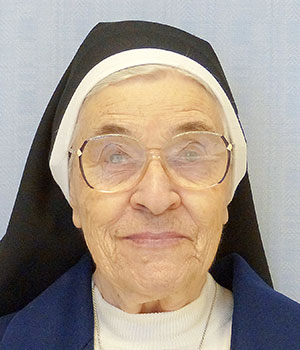 We share news of the death of Sister M. Marcelle (Frizzie), CSC, who died at 11:35 a.m. on December 10, 2022, in Saint Mary’s Convent, Notre Dame, Indiana. Sister Marcelle entered the Congregation from Susanville, California, on September 29, 1939. Her initial profession of vows took place on February 2, 1942.

“Though the glory of the young is their strength, gray hair is the splendor of the old,” according to Proverbs 20:29. Sister M. Marcelle (Frizzie), a Sister of the Holy Cross, died at 103 years old, in Saint Mary’s Convent, Notre Dame, Indiana, on December 10, 2022. The sisters at Saint Mary’s learned of her death when the feast day Mass, in honor of Our Lady of Loreto, had just concluded at noon. Even though Sister Marcelle had not been present at community liturgies for several years, one remembered that the centenarian had shown only a slip of gray hair under her veil. Though Sister had embraced the renewal of religious life initiated by the Second Vatican Council, she wore a modified veil as a sign of religious consecration to God. Sisters and staff spoke of her congenial spirit and open smile as a genuine witness to all she greeted. Sister Marcelle had always been authentically herself, rooted in a pioneer spirit and Holy Cross heritage.

Frizzie was Sister’s family name. The story goes that the original surname was Foisy, but her French-Canadian father, Camile, legally changed his name either to make it easier to pronounce or because his dark, curly hair led his coworkers to nickname him Frizzie. Margaret Mary Frizzie was the second of five children. She was born on March 12, 1919, in Sylacauga, Alabama, where her father worked at a sawmill. His roots were in St. Jerome, Quebec, Canada, and her mother, Hazel Marie (Young) Frizzie, was from Green Bay, Wisconsin.

The family eventually settled in northern California and started their own lumber business, wintering near Woodland and summering in Susanville and Crescent Mills. It was in Woodland, at Holy Rosary Academy, where Margaret Mary enrolled as a boarder and first met the Sisters of the Holy Cross. After graduation, she stayed longer to take commercial courses to help with the family business. She was proud of her parents, who had little formal education, but who had been successful. Her father operated the enterprise while her mother took care of the books. In between learning bookkeeping and getting to know the sisters better, Mary Margaret got sawdust in her hair at work, helping manufacture lumber by guiding the logs toward two huge blades that cut the timber and stacked it as lumber. She brought her physical stamina and strong faith to Saint Mary’s, Notre Dame, Indiana, when she entered the Sisters of the Holy Cross in 1939. At reception of the holy habit in 1940 she received the name of Sister Mary Marcelle. On August 15, 1945, Sister Mary Marcelle made her perpetual profession of vows, promising to persevere until death. Decades later, she thanked God for having lived with so many dedicated and outstanding women who were an inspiration to her.

Sister Marcelle said she enjoyed her “42 wonderful years in the classroom” teaching in elementary schools in Arizona, California, Idaho and Utah. A former student praised her as a great baseball coach. When the last school she taught in, St. Matthew in San Mateo, California, Sister Mary Marcelle remained there in parish ministry for another 24 rewarding years as a master catechist, lector and Eucharistic minister visiting the sick. She also assisted youth preparing for confirmation. The St. Matthew parishioners gave her a great send-off in 2008, in gratitude for her generous service and friendship. Sister embraced the Ministry of Prayer, living with other retired sisters at Saint Catherine by the Sea in Ventura, California, and lastly at Saint Mary’s Convent from 2011 until her death. She was a vowed woman religious for 80 years.

Sister Marcelle was a distant relative of Brother André Bessette, CSC, through the Foisy line in the family tree. Sister’s father was a second cousin once removed. Isaac Bessette, the father of the humble Holy Cross brother, had been a “lumberman.” Sister was overwhelmed with gratitude when she attended the 1982 beatification in Rome of the “Miracle Man of Montreal,” renowned for his intercession for the sick in the name of Saint Joseph. Saint André Bessette’s canonization followed in 2010. Though her religious community misses her smile, Sister Marcelle now enjoys a special family reunion, which includes a saint. Both Holy Cross religious were long-lived, she hardier than he. The family of Holy Cross now flourishes because of their humility and strong faith. 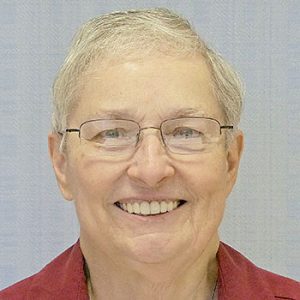 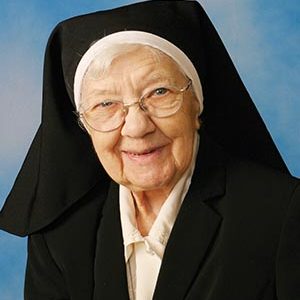 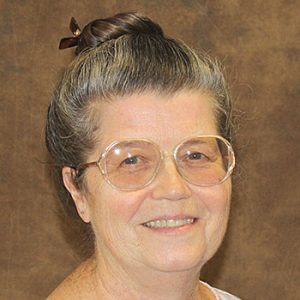 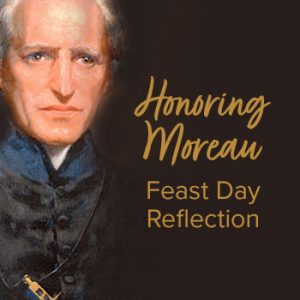 The Sisters of the Holy Cross celebrated the 150th anniversary of the Feast of Blessed...