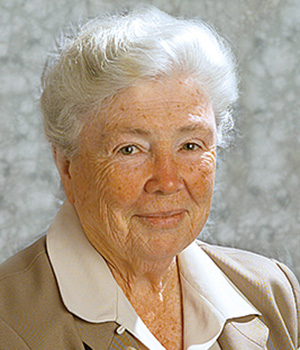 Word has been received of the death of Sister M. Agatha Ann (Mary Agatha Farrell), CSC, who died at 7 a.m. on January 25, 2019, in Saint Mary's Convent, Notre Dame, Indiana.  Sister Agatha Ann entered the Congregation from Los Angeles, California, on February 11, 1945. Her initial profession of vows took place on August 15, 1947.

Three days before her 21st birthday, Mary Agatha Farrell applied to the Sisters of the Holy Cross.  She was a civil service secretary working for the War Department in Los Angeles, California, in the last year of World War II. In response to a question about her motivation “for leaving the world,” she replied only, “I feel I have a vocation.”  In 2001 she was less cryptic filling out another form, this time explaining why she wanted to apply for a sabbatical for spiritual renewal: “After 56 years as a Sister of the Holy Cross, having worked every year in a school, hospital, or parish, this opportunity would be a ‘first.’ ”

As Sister M. Agatha Ann, she began her ministry in 1947 in elementary education in Catholic parochial schools throughout California and Utah, moving from the classroom to the principal’s office. From 1970 to 1975, while serving as principal, she earned her California license to direct day care-nursey schools. From 1975 to 1977, Sister Agatha Ann was director of personnel in the Department of Education for the Archdiocese of San Francisco. During those years she also worked in special education in public schools in the Daly City School District. Anyone who saw her doing business over the phone would have thought it all looked easy as she spoke with a broad smile. She had wonderful organizational skills, enjoyed being with people and was a good listener.

It’s no wonder that Sister Agatha Ann transitioned to pastoral care in 1977 at Holy Cross Hospital, Salt Lake City, Utah. Though she was there only a year, she returned to pastoral care and chaplaincy from 1991 to 1999 at Providence St. Elizabeth Care Center, North Hollywood, California.  In the intervening years, from 1978 to 1990, Sister Agatha Ann ministered in several parishes working with the elderly in Southern California and in the Seattle area.

Sister Agatha Ann was also a religious superior in her Congregation but was unpretentious in the role, whether as a local convent superior, a postulant formation assistant or regional councilor. Many times, she was also filling other positions beyond the local convent. At the time of Pope John Paul II’s visit to the United States in 1987, she was asked by a reporter in Tenino, Washington, about priestly ordination for women. She was never known as a firebrand, but with a shrug, she reluctantly offered the following viewpoint to The Olympian: “Here at St. Peter’s Mission, we minister as best we can as a group of women in the church. We can do that in so many ways. I would have no objection to women being ordained nor would I have any objection to a married clergy.”