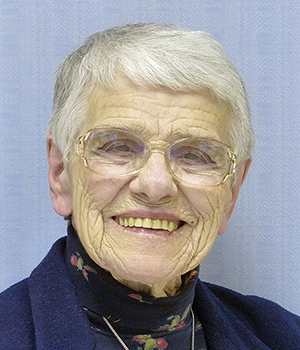 Read the words of remembrance shared at Sister Patricia’s funeral.

“If I speak in the tongues of men and of angels, but have not love, I am a noisy gong or a clanging cymbal.” (I Corinthians 13:1) Sister Patricia Ann Thompson’s mother tongue was English but she experienced a deeper kinship with the human family by learning French and Spanish as well. It was Spanish she used to greatest effect to promote the language of justice and love.

Patricia Ann Thompson was born in Oxnard, California, on October 23, 1925, of Charles Henry Thompson and Sarah Agnes Shearon. Their Garden of Eden was in the nearby Upper Ojai Valley, farther inland where the Thompsons lived as citrus growers, raising Sunkist products. The Ventura County Sunkist plant was located closer to the Pacific Coast and trucks laden with oranges and lemons poured out of the valley, affording a living to Spanish-speaking migrant workers and orchard owners who worked alongside them in the California sun. The Thompsons were members of a vibrant Catholic community at Saint Thomas Aquinas Parish in Ojai and interacted daily with the Augustinian friars who staffed the parish and sponsored the recently completed Villanova Preparatory School for boys. Mr. Thompson died in 1930 but his wife continued to run the business. Patricia attended the local public schools until 1934 when she enrolled in the new Academy of St. Catherine in Ventura staffed by the Sisters of the Holy Cross, graduating in 1943. The experience of excellent teaching and contact with the sisters led to her attendance at Holy Cross-sponsored Saint Mary of the Wasatch College in Salt Lake City, Utah. At the end of her sophomore year in 1945, she entered the Sisters of the Holy Cross at Saint Mary’s, Notre Dame, Indiana. She completed her Bachelor of Arts degree in Spanish in 1951 from Saint Mary of the Wasatch and earned a Master’s degree in Spanish from Stanford University, Palo Alto, California, in 1965.

Sister spent 32 years in the ministry of education, 12 in Catholic elementary schools in California and Washington, and 20 years in the secondary schools of Utah and California. Her subject areas were Spanish, French, English and religion. In 1976, Sister Patricia Ann was one of the founding members of the Holy Cross Hispanic Ministries Committee consisting of the Sisters of the Holy Cross, Sisters of Holy Cross, and Marianites of Holy Cross, who intensified their pastoral involvement with Spanish-speaking communities in the Americas. The Sisters of the Holy Cross will remember “Sister Pat Ann,” who served as a councilor for the Western Region for two years and then as Moreau Regional Superior at Saint Mary’s for three years until July 1984. Approaching 59 years old, Sister Patricia Ann then immersed herself in parish ministries with the Hispanic community over 12 years under the banner of the Brother André Center, which she founded in 1985 for outreach to the poor in St. Agnes Parish, Los Angeles, California. She helped many to become citizens of the United States.

In August 1997, Sister was assigned as superior to the sisters’ retirement community of Saint Catherine by the Sea, Ventura, California. She was deeply grateful to be back in the very place where she experienced her first call to consecrated life. Since 2003, Sister Patricia Ann had lived at the Saint Mary’s motherhouse, serving three years in Mission Effectiveness for Holy Cross Services Corporation before transitioning to volunteering in the Saint Mary’s Convent library, where she converted the facility to a digital inventory system. It is hard to know if Sister Pat Ann ever really retired to a full-time ministry of prayer because she maintained hundreds of relationships throughout her life and received visitors regularly. She knew the language of the heart and always found ways to reach beyond borders with humor, faith and friendship.

The greatest experience of her life, when nearing 90 years old, was to be in El Salvador in May 2015 for the beatification of Óscar Romero, who had such a passionate commitment to peace, justice and human rights. Sister Patricia Ann had a great devotion to the Archbishop of San Salvador, who was assassinated March 24, 1980, while celebrating Mass in a hospital chapel. He was later canonized in 2018 in Rome. Sister now joins this saint whose memory and example brought her to tears in the Plaza Salvador del Mundo the day of the beatification. She too is now an exemplar and witness of Christian love, having listened to the poor in their own language. Sister was 95 years old when she died at Saint Joseph Regional Medical Center in Mishawaka, Indiana, shortly after midnight on February 9, 2021. Despite a medical emergency which had taken her to the hospital, she was able to laugh and encourage those who called and expressed their concern. Now she entertains angels and has found company with other friends of God. They all speak the same language of justice and love.