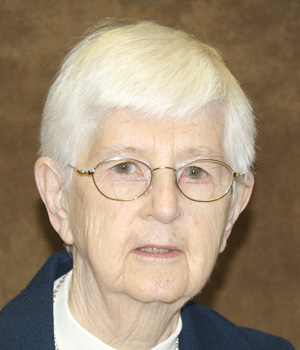 We share news of the death of Sister Mary Jane Honan, CSC, who died at 6:42 a.m. on April 24, 2022, in Saint Mary’s Convent, Notre Dame, Indiana. Sister Mary Jane entered the Congregation from Naugatuck, Connecticut, on August 1, 1944. Her initial profession of vows took place on February 2, 1947.

Some say that Sister Mary Jane Honan at 99 years old did not want the fuss and attention of the traditional summer celebration of her 75th jubilee of initial profession of vows as a Sister of the Holy Cross. Her official jubilee celebration was to take place in July 2022. In her own way, she had already quietly observed the anniversary in February, the last of her entrance group or band. She died at Saint Mary’s Convent on the morning of April 24, 2022, where she had lived the last seven years devoted to a ministry of prayer. Many sisters kept vigil with her and staff attended her. Sister Rachel Anne Callahan, CSC, wrote from Silver Spring, Maryland, that Sister Mary Jane had “the grace of the ordinary” and was “a simple servant and reservoir of wisdom to many of us.” Where did that grace and wisdom come from?

Mary Jane Honan was born on March 5, 1923, in Waterbury, Connecticut, to Michael Joseph Honan and Ethel (McEneaney) Honan. She grew up with two younger sisters, Evelyn and Jean, in Naugatuck, Connecticut, where her father was a funeral director. After completing St. Francis Grade School and Naugatuck High School, she attended Dunbarton College of the Holy Cross in Washington, D.C., earning a bachelor’s degree in English in 1944. She found living on a college campus in a large city quite different from life in a small New England town. During the last two years of World War II, there were frequent air raids and blackouts, as well as unease among the students. Many had fathers or brothers in the military. Here, Mary Jane first met the Sisters of the Holy Cross, who sponsored and taught at the college. She claimed that their prayerfulness, love of community, kindness and apostolic spirit awakened within her the desire to become a member of their religious family.

Entering the Congregation at Saint Mary’s, Notre Dame, Indiana, the summer of her graduation from college, she received the religious name, Sister M. Augustin. During her first six years of ministry, which began in 1946, she was a high school teacher of English in several schools sponsored or staffed by the Sisters of the Holy Cross in the District of Columbia and Virginia. From 1952 to 1964, she was a professor of English at Cardinal Cushing College in Brookline, Massachusetts. Her summer months were devoted to study. In 1955, she earned a master’s degree in English from The Catholic University of America in Washington, D.C. Subsequent summers found her continuing graduate studies in English at Boston College, Chestnut Hill, Massachusetts, and graduate studies in secondary school administration at Columbia University in New York.

Following her 12 years at Cardinal Cushing College, she was appointed principal and religious superior at Saint Mary’s Academy in Alexandria, Virginia. This assignment ended with her election in 1969 as regional superior of the Eastern Secondary Region of the Congregation. Her role as a regional leader lasted four years until her election as a general councilor of the Congregation, a position she held for 12 years. The time she spent as a general councilor shifted the focus of her activities away from the classroom to the welfare of the Congregation as a whole. During these years, she selected the option that became available to change her religious name back to her baptismal name.

When her second term as general councilor ended in 1984, she volunteered together with two other sisters to undertake a new venture for the Congregation in the Archdiocese of New Orleans—the opening, administration and staffing of a skilled nursing facility for 180 residents in Marrero, Louisiana. For five challenging years, she remained on the administrative staff of the Wynhoven Health Care Center. She has said that she was grateful for the opportunity to work with elderly residents, learning from them how to deal with suffering and diminishment. Her desire to continue to minister to the elderly led to her appointment in 1989 for seven years as superior and administrator of Saint Angela Hall in Kensington, Maryland, the Eastern Region’s retirement home with over 40 sisters in residence. Four years followed as assistant superior at Saint Mary’s Convent, Notre Dame, Indiana.

At the end of this service, she spent a year in California with time for rest and spiritual renewal, living at Saint Catherine by the Sea Convent in Ventura for part of that period. While there, she spent time at the Center for Spiritual Development in Orange, south of Los Angeles, in an intercommunity experience of lectures, prayer, reflection and leisurely pursuits. She thoroughly enjoyed her time in California before returning east to retire at Saint Angela Hall in 2001, where she lived a community life of prayer, joy and volunteer service to others in Silver Spring. In 2015, she retired to Saint Mary’s.

Sister Mary Jane was a wise and simple woman who had a deep spirituality rooted in dependence on God. She said she approached each day with hope and enthusiasm trying to meet the challenges that faced her. Throughout her life she served on a number of boards in the fields of education and health care, including the following: Saint Mary’s College, Notre Dame; Holy Cross Health System Corporation, South Bend, Indiana; Holy Cross Hospital, Silver Spring; Saint John’s Health Care, Anderson, Indiana; Mount Carmel Health, Columbus, Ohio; and Holy Cross Care Services, South Bend. Her enjoyment of community life, along with her common sense and willingness to face new challenges, were strong characteristics of her personality. Favorite activities included listening to good music, solving crossword puzzles, swimming, visiting places of interest, and reading—especially the poetry of Emily Dickinson. Look up Dickinson’s poem, “I’m Nobody! Who are you?” Sister had always been able to set others at ease, never trying to be a “Somebody” herself.

Sister Mary Jane died on the second Sunday of Easter when the Catholic Church observes God’s Divine Mercy. The sisters remembered her and all our beloved dead at the community Mass. “Dona nobis pacem,” “Grant us peace,” sang the assembly. God’s mercy endures forever. Alleluia! Our sister is home and enjoys the fullness of God’s grace. 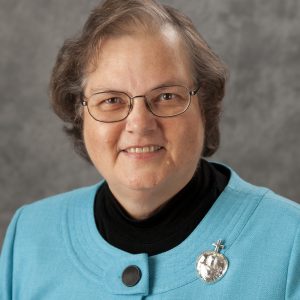 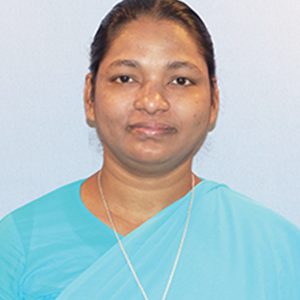 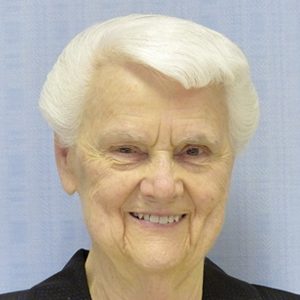