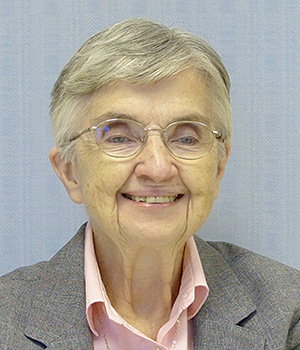 By the time the Saint Mary’s community had gathered for the festive Easter morning liturgy at the motherhouse, Sister Joseph had already seen the Paschal Light of the risen Christ when she died on Easter at Saint Mary’s Convent, hours before the break of day.

Catherine Margaret Sullivan was born during the dark, long winter days of Advent, December 10, 1924, in Chicago, Illinois. Her Catholic parents were both natives of County Kerry, Ireland, but had never met until coming to the United States a few years apart. Her father, Timothy Sullivan, fought in World War I and married her mother, Dora Moriarty, soon after the war. The Sullivans had three children: Eileen, James Bernard, and the youngest, Catherine Margaret or Peg.  Mr. Sullivan worked for Bowman Dairy and Mrs. Sullivan was a homemaker. Mrs. Sullivan was in her late thirties when she died, never fully recovering from emergency surgery, dying on Peg’s seventh birthday. Sister Joseph wrote: “These were really sad days for us.” Their father was so shaken by his wife’s death, that he sought help from relatives to care for his children. Eventually, it was necessary to split up the children, though they stayed in Chicago. Peg and brother Jim moved into the Moriarty home of her Uncle Con and his wife, Bridget, who already had six children. Eileen was welcomed into the Callahan home with her mother’s sister Catherine, her husband Dan, and five children. Sister Joseph learned from her extended family how to be a generous, caring, loving and sharing person herself.

Catherine Margaret Sullivan entered the novitiate in February 1943. She first met the Sisters of the Holy Cross at St. Theodore Elementary School in Chicago and wanted to be a nurse. With only an invitation to consider if she had a religious vocation, she applied to St. Mary’s Academy in Notre Dame, Indiana, for her secondary education, entering the juniorate as preparation for her admission to the convent after her third year. In the words of her pastor at St. Theodore’s, she had “always been a very good sensible girl.”

Sister Joseph earned her bachelor’s degree in education from Saint Mary’s College, Notre Dame, in 1962 after many summers. But since 1945 she had been a successful teacher in Catholic parochial schools in Indiana, Michigan and Illinois. In 1967 Sister Joseph earned her master’s in education and reading from Saint Francis College in Fort Wayne, Indiana, and became principal at five schools in the Midwest from 1968-1988. From 1988 to 1999 she served at Most Holy Redeemer School in Evergreen Park, Illinois, as assistant principal, teacher and learning center coordinator. Sister Joseph transitioned to the motherhouse, and in September 2000 she was superior at Lourdes Convent. Sister M. Rose Edward (Goodrow) is grateful for Sister Joseph’s assistance to her and the Angela Area during Sister Rose’s term as Area coordinator 2005-2010.

Since 2010, Sister Joseph’s ministry of prayer has sustained her community in Saint Mary’s Convent where she will be remembered for her laughter, warmth and loving heart. When Sister celebrated her golden jubilee in 1995, Archbishop Joseph Cardinal Bernardin, of Chicago, wrote her with encouragement from the Holy Redeemer parishioners. “Thank you for your commitment and generous response to the gospel of Jesus over these many years… . You have been a blessing to the church and to the family of Sisters of the Holy Cross.” Now, Sister Joseph celebrates where one year is as a thousand, and a thousand is as a year. Christ is risen! 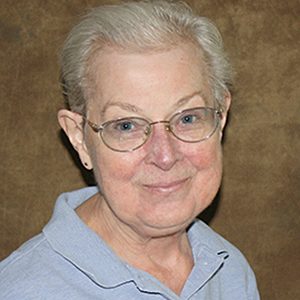