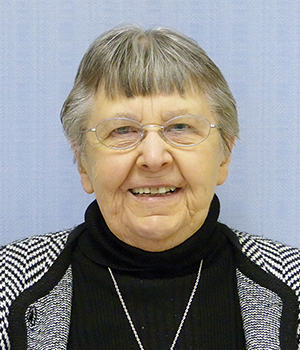 We share news of the death of Sister M. Cyril (Irene Dubala), CSC, who died at 9:20 p.m. on March 20, 2021, at the Center for Hospice Care, Mishawaka, Indiana. Sister Cyril entered the Congregation from South Bend, Indiana, on August 1, 1944. Her initial profession of vows took place on
February 2, 1947.

“She is a very capable, industrious and honest young lady, willing to learn and doing so from her own initiative.” Sister Gregory, CR, a Sister of the Resurrection, the principal of South Bend Catholic High School, wrote these words in 1944 in her letter of recommendation for Irene Dubala to enter the convent. Little did anyone know the future of this young woman who would become Sister M. Cyril, a Sister of the Holy Cross, who lived as a vowed religious for 74 years. Sister Cyril died at 95 years old at the end of the fourth week of Lent, the evening of March 20, 2021. Only recently had she left her sisters in Our Lady of Grace Community, Saint Mary’s Convent, Notre Dame, Indiana, to spend her last days nearby at the Center for Hospice Care.

Irene Dubala was born in South Bend on February 26, 1926. Her parents were Joseph Dubala and Genevieve Jankowiak Dubala. Irene had three sisters, Dorothy, Loretta and Esther, and a brother, Robert. Her sister Loretta Harmaciwski died suddenly in 1988. All of Sister Cyril’s life was spent in the American Midwest, mostly in the South Bend area. Her elementary education began in first grade at St. Stanislaus School and continued through to graduation from South Bend Catholic High School in 1944.

Irene Dubala was 18 years old when she entered the Congregation of the Sisters of the Holy Cross on August 1, 1944. Sister received the holy habit on February 2, 1945, and her religious name, Sister Mary Cyril. It is likely that she was named for Cyril, the ninth-century missionary to the Slavs, given the local Catholic population’s Slavic heritage in South Bend at the time. Or her patron could have been Saint Cyril of Alexandria, the fifth-century philosopher bishop, known as Pillar of the Faith and Doctor of the Church. Both saints reflected Sister Cyril’s own love for learning, pursuit of knowledge, and deep-rooted passion to ensure that students knew the basic skills of reading, writing their own thoughts, solving math problems, and using their initiative to learn without a teacher. Fellow teachers remember Sister Cyril as a favorite mentor.

During at least 20 of those teaching years, Sister Cyril was taking classes herself, starting at Saint Mary’s College, Notre Dame, where she earned a Bachelor of Science in mathematics and chemistry in 1954. De Paul University in Chicago, Illinois, awarded her a Master of Science in the teaching of physics in 1963. Two master’s degrees from the University of Notre Dame were earned in 1969 and 1971. One of her students, Linda Milzarek, was inspired to become a teacher herself, recalling that Sister Cyril was “an extremely intelligent, soft-spoken, kind teacher,” who spent hours preparing her classes in chemistry and physics. “She always had time for her students.” Sister Cyril was said to be comfortable with nature’s creatures, large and small, according to Kristy Kutch, and Sister Cyril was not flustered in the least when a prankster put a snake in her classroom desk. Sue Meer was a colleague who was aware that Sister volunteered at the public library to help students read. At Sue’s request, Sister Cyril, during her free period, helped a student improve his reading skills. Thus, she was introduced to the Harry Potter books. Sister Cyril was a wizard herself, guiding teenagers from the fantasy and magic of alchemy to the wonders of the modern sciences.

At the end of the academic year in June 1997, Sister Cyril retired from teaching high school, but she did not cease from giving service. She put aside her lab coat and donned blue jeans and work clothes to join Sister M. Anna Clare (O’Connor), CSC, who had recently founded Angela House as a retreat center in Michigan City. When Saint Mary’s Parish School was closed, the convent was transformed into Angela House, named for Mother M. Angela (Gillespie), CSC, first American superior of the Sisters of the Holy Cross. Sisters Anna Clare and Cyril, with the blessing of the Congregation and the generous support and practical help of many sisters and laity, provided space, time and hospitality for those who wanted “to be at rest with the Lord … for quiet and peace.” The sisters shared morning and evening prayer with retreatants, offered spiritual guidance, and hosted several programs and speakers. Their ministry included cooking and housekeeping to ensure a comfortable place for as many as 30 people. In between daily duties at the retreat center, Sister Cyril still found time to visit nursing homes and tutor students who might come for help in math and reading.

In 2006, after 12 years at Angela House, Sisters Cyril and Anna Clare, “an unlikely pair who had become friends,” retired to Saint Mary’s Convent. After moving to Saint Mary’s, Sister Cyril generously helped sisters who were getting their degrees at Holy Cross College, Notre Dame, with math. Sister Anna Clare died in 2012. Sister Cyril continued to volunteer her services where needed and was devoted to a ministry of prayer for the world’s needs. Sister Cyril’s days on this earth have ended. We give thanks for how she opened minds and hearts to the wonders of reading, of learning; how she cultivated a sense of satisfaction and accomplishment in solving science and math problems; and how her delight in words became prayers.