The funeral Mass was celebrated Friday, June 5, 2020, in the Holy Cross Villa Chapel, Shillong, Meghalaya, India, followed by burial in the Cathedral of Mary Help of Christians Parish Cemetery, Shillong.

Word has been received of the death of Sister Lucy Lalsangzuali, CSC, who died at 4:15 p.m. on June 4, 2020, in Civil Hospital, Shillong, Meghalaya, India. Sister Lucy entered the Congregation from Khawzawl, Mizoram, India, on May 24, 1999. Her initial profession of vows took place on November 29, 2002.

She called herself a pioneer. Sister Lucy Lalsangzuali was the first young woman from India to enter the international Congregation of the Sisters of the Holy Cross. Sister lived fully her 21 years in Holy Cross, her formative years beginning and ending in Shillong as a daughter of the Church and spiritual mother to many. She died during the week of the feast of Pentecost, in the Civil Hospital in Shillong, Meghalaya, India, on June 4, 2020. She now joins previous Holy Cross pathfinders of other generations, her parents and her sister Helen, who predeceased her.

Lucy’s father and mother were simple farmers in Lungtan, a small, remote, multi-ethnic village in Northeast India in the highlands of the Champhai district of Mizoram. John Rualpela and Carmeli Rokhumi Varte were devout Catholics and active parishioners in an enclave with a long history of Christian missionary activity and high literacy. Lucy, born in Lungtan on August 13, 1974, was the fifth child of four daughters and four sons. The older brothers and sisters attended school. Her parents, despite some hardship, arranged to educate Lucy at the Holy Cross Brothers’ School in Champhai, where she also boarded and worked from 1988 to 1993. Eventually her parents settled in Khawzawl, where the Holy Cross priests had opened a parish.

Lucy completed her higher secondary education in 1996 and earned a Bachelor of Arts degree at Khawzawl Government College in 1999. For six years she had considered a religious vocation as she accompanied various clergy on their pastoral visits. However, she felt an obligation to her family first and helped support them while teaching. It was Father Simon Fernandez, CSC, and Father Harry D’Silva, CSC, who encouraged Lucy to enter the Sisters of the Holy Cross, who five months before had established their first mission in India, in Shillong. If it had not been for the Holy Cross priests, Lucy would have entered the indigenous Missionary Sisters of Mary Help of Christians (MSMHC), the sisters she knew best and who initially inspired her vocation.

With the encouragement of her parents, Lucy Lalsangzuali began her formation in Holy Cross in Shillong on May 24, 1999, as an aspirant, then as a postulant. On December 7, 2000, she began her novitiate in Savar, Dhaka, Bangladesh. She was the only Indian among her peers in Bangladesh. Ironically, her Indian passport was often questioned by her countrymen whenever she crossed the border back into India, since the Mizo people also have tribal and ethnic origins in western Burma and eastern Bangladesh. On November 29, 2002, Sister Lucy made initial profession of vows because, “I enjoyed the hospitality, equality, friendliness, freedom and openness of Holy Cross—traits very similar to and connected with the culture from which I had come.” She felt called to serve all people “in the plains and hills, over the mountains and across the ocean.”

Sister Lucy subsequently completed her professional government teaching degree (equivalent to a Bachelor of Education degree) at the College of Teacher Education in Shillong in 2010 and earned a Master of Arts in sociology at Madurai Kamaraj University, Shillong, in 2011. During those years of study, she was simultaneously engaged in ministry, not uncommon in the life of an apostolic woman religious. She was an enthusiastic teacher of youth and a social worker with women in her years of ministry from 2002 to 2017, teaching in Agartala, West Tripura, India, twice at Saint Andre High School and at Our Lady of Holy Cross School.

When Sister Lucy lived in community in Bodhjungnagar, while teaching and studying, she found time to sing and plan activities for her neighbors, the orphans of Holy Cross Boys Town, a ministry of the men of Holy Cross. She had as much fun as her young charges when she used her guitar to help them settle down and focus. Sister Lucy’s last two missions were in Meghalaya, India, at St. John Bosco Secondary School in Nongstoin and St. Paul Higher Secondary School in Jatah village, East Khasi Hills District.

From 2012 to 2014, Sister Lucy crossed several borders by participating in the Sisters of the Holy Cross Leadership Development Program, beginning in Ghana, West Africa, where the Holy Cross sisters had established ministries in 1967. The hospitality and experience of the Ghanaian sisters made her realize that she was not the only pioneer in Holy Cross. Her administrative internship continued in Salt Lake City, Utah, at Holy Cross Ministries and at Saint Vincent de Paul, Our Lady of Lourdes and J.E. Cosgriff Memorial schools. Sister Lucy’s leadership was affirmed when she was elected a delegate to the sisters’ General Chapter in May 2019. Later elected a councilor for the Area of Asia, she assumed office in November. A short time later, she took seriously ill and never fully recovered.

When Sister Lucy made her perpetual profession of vows in Shillong on October 31, 2008, she committed her heart forever “to Jesus who died for me.” Responding to God’s love song, she likened herself to “a guitar in the hands of my Music Master.” A chorus of Alleluias is now being sung in the Mizo language in the heavens above, among those of every tribe and nation. 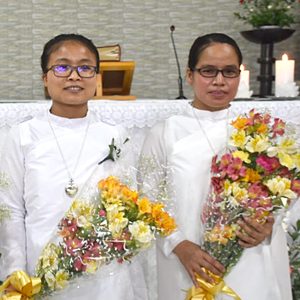 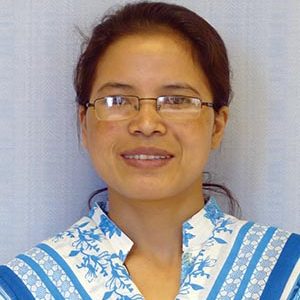 by Sister Ridahun Basaiawmoit, CSC “Your word is a lamp unto my feet, and a...