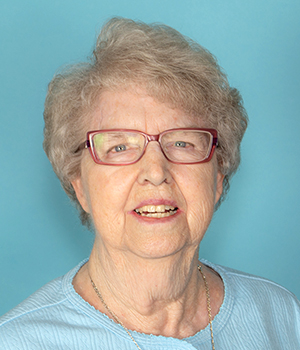 We share news of the death of Sister Joanne Becker, CSC, who died at 11:29 a.m. on July 5, 2021, at St. Joseph Regional Medical Center, Mishawaka, Indiana. Sister Joanne entered the Congregation from Bethesda, Maryland, on September 4, 1961. Her initial profession of vows took place on
August 15, 1964.

Sister Joanne Becker lived with chronic health issues most of her adult life and yet was able to maintain an active community life as a Sister of the Holy Cross for almost 60 years. She was an assistant archivist since 2012 for Congregational Archives and Records at the motherhouse at Saint Mary’s, Notre Dame, Indiana. When she left her desk on a Friday to go home, staff said goodbye as usual: “See you on Monday.” On Monday, her desk chair was empty. Sister Joanne had been admitted to St. Joseph Regional Medical Center in Mishawaka, Indiana, where she died on July 5, 2021, at 78 years old.

In recent years, Sister Joanne had done some housecleaning and attempted to organize her personal effects and return to her interest in art as an expression of her spirituality and attraction to nature. As she said, “I paint or watercolor what I love whether trees, flowers or birds.” She favored pastels when working with colored pencils. Trips to Lakeside, Michigan, provided rest, reflection, retreat, or time to enjoy the company of other sisters at the Congregation’s recreation site. There she soaked in the beauty of God, her relationships and her surroundings.

Sister Joanne had the practice of looking back over her life periodically. She left perfectly typed pages telling her story of God’s call to her. Much of what follows came from
Sister herself.

“God invited me, Joanne Elizabeth Becker, into this world of beauty and promise.” She was born on July 24, 1942, in Washington, D.C., to Helen Josephine Roach and Karl Henry Becker. She was their first child, followed by her two brothers, Dick and Jim, being raised initially in Chevy Chase, Maryland, and later in Bethesda. Her parents both worked as office clerks. Her mother was also a bookkeeper and her father a salesperson. The parents were involved in school and church activities during her childhood. Her extended family on her mother’s side gathered frequently and were active in the political life of the Washington, D.C., metropolitan area. In her formative years she learned to pray the rosary from an aunt and uncle and godparents who nurtured her faith life. Her maternal grandmother took her to various churches on Holy Thursday to visit altars of repose and was a crucial influence in Joanne’s feeling loved and in God’s constant care. It is no surprise that in high school Joanne was involved in the Catholic Student Mission Crusade and became Prefect of the Sodality at The Academy of the Holy Cross, Kensington, Maryland, where she first met the Sisters of the Holy Cross in 1957. Joanne maintained her devotion to the Blessed Mother throughout her life. She soon traded her title of May Queen her year of graduation in 1961 for that of postulant when she entered the Congregation the following September to begin her formation as a Holy Cross sister at Saint Mary’s,
Notre Dame.

Upon reception of the holy habit on June 10, 1962, she received the name Sister M. Clare Thérèse, a name she kept only until customs changed in 1968. Saint Thérèse, the Little Flower, was her favorite saint, and Joanne felt God was giving her a sign of affirmation when she received the new name as a novice. She had written her letter asking for admittance to the Congregation on the saint’s feast day. The years of initial formation are never easy since consecrated vowed life is a perpetual commitment one has felt called to by God for loving service. Joanne entered the convent in late adolescence. By the time she made her final vows on August 15, 1970, she was a mature young woman of prayer “who wanted so much to give my life to God forever.”

Sister Joanne was gifted with a personality that was very sociable. She had a warm and sympathetic spirit accompanied by an open, frank and direct manner when dealing with others. Perhaps that is why, years later in South Bend, Indiana, she was so good working with the lay Sisters of the Holy Cross Associates and was a welcoming presence wherever she ministered. She developed a circle of friends with the associates, who supported the Congregation’s mission through prayer and service. She was a good woman who was inclusive, gentle and reached out to so many.

Years earlier, Sister Joanne had described herself as “not the best student. I found Saint Mary’s College challenging since in formation we had to share books and time to study was limited.” Eventually, Sister Joanne earned her bachelor’s degree in elementary education at Dunbarton College, Washington, D.C., in 1971. “I was supposed to be trained as a practical nurse, but the Eastern Province needed teachers. I loved teaching the younger students, third grade being my favorite. I found I had the gift of creativity and was always looking for new ways to interest students and make it fun.” Sister Joanne taught 20 years in Catholic elementary schools and parish religious education in Virginia, Washington, D.C., Texas, Illinois and Indiana from 1966 to 1986. In 1986, she transitioned to library work in South Bend, first at Christ the King School and later at Holy Family School. She was the library assistant at Holy Cross College 1997–2009 and returned later to volunteer there for three more years.

It was then that Sister Joanne used her research skills in Congregational Archives and Records, beginning in 2012. “Curiosity had always been a trait of mine. Maybe that is why I like reading mystery novels. In my ministry with the archives department, it is a thrill to discover some of the unknown stories of those women who have gone before us. My life has been enriched by these stories. And I give thanks to God for the women who have been part of our history.”

When Sister Joanne cleared off the surface of her desk in archives, she had completed all the research requests that had come to her. She was finally caught up on her work. Her files were in order. She had been to daily Mass as she always had. Sister Joanne Becker is now one of those women who are part of our history. The last lines of her 2015 reflection read, “God has been good to me. My favorite quote from Scripture is from Jeremiah 29:11: ‘I know the plans I have for you. Plans for your well-being, plans not to harm you. Plans to give you hope and a future.’” Thanks be to God who has raised up our sister, Joanne, and restored her to health and well-being, now and forever. 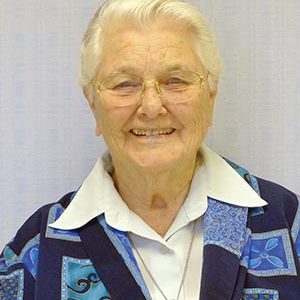 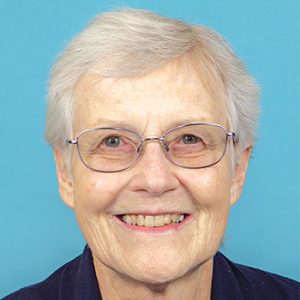