Word has been received of the death of Sister Grace Watson, CSC, who died at 10:04 p.m. on August 14, 2019, in Saint Joseph Regional Medical Center, Mishawaka, Indiana. Sister Grace entered the Congregation from Morris, Illinois, on September 7, 1950. Her initial profession of vows took place on August 15, 1953.

Sister Grace Watson, CSC, died late at night on August 14, 2019, at Saint Joseph Medical Center, Mishawaka, Indiana. Her sudden medical crisis had lasted less than a week. The next morning, her community, the Sisters of the Holy Cross, observed their anniversaries of initial profession of vows. August 15 was the Solemnity of the Assumption of Mary into Heaven—and Sister Grace’s 66th anniversary as a vowed woman religious. She missed the celebration on earth but joined the feast prepared for her in heaven.

Grace Joyce Watson was the daughter of Anthony Watson and Marie Black. Her parents owned a grocery business in Morris, Illinois, where Grace herself had a job as a store clerk when she was not in school. Her youth was spent in Morris at Immaculate Conception Church where she attended its parish elementary school, graduating in 1946. The Sisters of the Holy Cross had been a strong presence in Morris since 1857, when the sisters founded St. Angela’s Academy. Grace graduated from the academy in 1950, and promptly entered the convent. Her mother had three sisters who were Holy Cross sisters. Two aunts predeceased Sister Grace: Sister M. Antonella (Black) in 2000 and Sister M. Anna (Black) in 2005. Sister M. Lorraine (Black) mourns her niece who had been her neighbor at Saint Mary’s, Notre Dame, Indiana, living at a nearby convent.

The virtues and qualities of Grace Watson in her youth grew and matured throughout her adulthood. At 17 years old she considered herself having an “amiable disposition” with a desire to live for God alone. Her pastor had described Grace as “a very fine young lady, industrious and of excellent character.” Holy Cross Sister M. Ivan (Hertel) wrote from St. Angela’s Academy in 1949, “I have never dealt with a girl who is so well-balanced in every way. Grace should be a great power for good in Holy Cross—with the assistance of God’s grace.” She was given the name Sister Marie Anthony at her reception of the holy habit on August 15, 1951.

From all accounts Sister Grace became the excellent elementary school teacher she wanted to be. A close friend, Sister Suzanne Patterson, said that Sister Grace loved her ministry of teaching.  “Teaching was her deepest call; education was her longest, sustained ministry. It was said that Gracie could teach a brick wall to read!”  From 1953 onward Sister taught at Catholic parochial schools in Flint, Michigan; Evergreen Park, Chicago, Woodstock and Morris, Illinois; and Valparaiso, Michigan City, and South Bend, Indiana. Circa 1968 students would have known her by her baptismal name, Sister Grace, to which she had returned when customs changed. From 1990, Sister Grace was an active presence for over a decade in South Bend at Holy Cross School and St. John the Baptist School, either as a teacher, a substitute teacher or as a Bingo caller after school with latchkey children. She will be remembered for her love and dedication to her students.

Sister Grace had taken her own education seriously. She graduated from Saint Mary’s College, Notre Dame, Indiana, with a Bachelor of Science in Education in 1954; Cardinal Stritch University, Milwaukee, Wisconsin, with a Master of Science in reading in 1973; and Mundelein College, Mundelein, Illinois, with a Master of Arts in religious education in 1981.

Sister Grace loved being involved up to her elbows in what sisters traditionally called “mission life,” the active living out of one’s ministry in the trenches—wherever God sent you! After leaving the classroom she found ways to help others, including the retired sisters at Saint Mary’s Convent. Sister Grace also joined with several sisters at Saint Mary’s, sponsoring a variety of projects in South Bend to assist the materially poor with practical help provided by grants from the Sisters of the Holy Cross Ministry With the Poor Fund. The 17-year-old of amiable disposition prayed in midlife to develop a more assertive personality. By the time she was 86 years old, our dear Sister Gracie had smiled her way past anyone standing in the way of her compassionate heart. She exercised great power for good in Christ’s name, like Mary, mother of mercy and love. 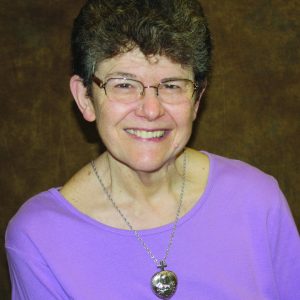