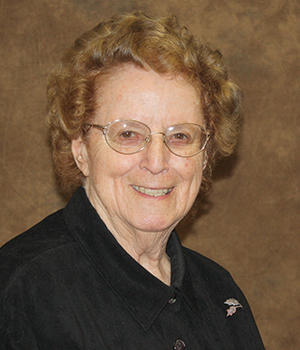 Word has been received of the death of Sister Evelyn Joyce Metro, CSC, who passed on July 2, 2018, in Saint Mary’s Convent, Notre Dame, Indiana. Sister Evelyn entered the Congregation from Gardena, California, on January 24, 1948. Her initial profession of vows took place August 15, 1950

Sister Evelyn Joyce Metro could tell a good story but one was never sure how much she exaggerated. However, it seems she had a grateful memory. By all accounts she was a lady to her fingertips, who kept her gracious composure, even when giving a disruptive eighth grader a piece of her mind. Later at the convent evening meal, she shared her rendition of the incident, always bringing laughter. Sister was a terrific junior high teacher who had a wonderful relationship with her students. She instinctively knew how to motivate them to tutor one another and redirect their negative energy into leadership of the class.

Her 30 years teaching grades five through eight were spent in Catholic schools in California, Washington and Nevada (1950-1980). She also proved to be an excellent religion teacher and senior class advisor at Judge Memorial Catholic High School, Salt Lake City, Utah (1980-1988).

In 1947, applying to the Sisters of the Holy Cross, she described herself as “cheerful and even-tempered.”  In 1989 she wrote that the greatest gift she had to share was “my love of life.” There was not much difference between the girl and the mature woman. Almost every account of long ago events, recalled with gusto and good humor, ended with her saying, “God has been good.  I have had a good life.”

Sister Evelyn Joyce had 90 years of a good life. Sister M. Agnes Loretto (Scheberle), CSC, supported her application to enter the convent soon after graduation from Saint Agnes High School, Los Angeles, California. Sister wrote that Evelyn was “earnest and will make every effort to be a real Sister of the Holy Cross.” Evelyn received the name Sister Mary Francilda at her reception into the novitiate; in 1967 her family asked her to return to her baptismal and family names when the option was offered.

She loved travel and wrote, “While I don’t think of myself as domestic, others tell me I’m a good ‘home-maker’.” She brought that gift to the Saint Mary’s College Rome Program by being a welcoming presence to college women studying abroad, far from home (1989-1998). Former Rome Program Director Dr. Portia Prebys recalls Sister Evelyn was “a gem of a person and a wonderful colleague” who had a life-changing influence on the lives of several hundred students. She was “a beacon” for faculty, staff, the students and their families, and the Italians whose paths she crossed—and “a profound example of living in faith, hope and charity.”

Sister Evelyn Joyce left the Eternal City to live north of the City of Angels in Ventura, California, with her community at Saint Catherine by the Sea, eventually retiring there for 17 years. In 2015 Sister Rita Slattery assisted her in the move to Saint Mary’s Convent, Notre Dame, Indiana, and recently wrote, “Evelyn Joyce was aware of her challenges at that time, but seemed able to face them with courage and hope.” In all her 70 years of community life and ministry, Sister Evelyn Joyce was earnest and a real Sister of the Holy Cross.  You may donate to the Ministry with the Poor Fund in Sister’s name.