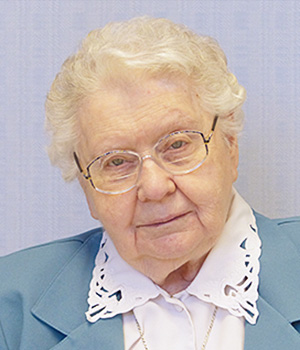 “Now, Lord, you may dismiss your servant in peace” (Luke 2:29). Sister M. Mildred Louise died at Saint Mary’s Convent on the 78th​ anniversary of her initial profession as a Sister of the Holy Cross.

In 1991, Sister Mildred Louise wrote a short reflection on the anniversary of her 50 years since her first profession of vows as a Sister of the Holy Cross. She imagined God’s presence in her life as that of a weaver creating a tapestry on canvas. Sister considered herself as a work-in-progress. She saw “vivid colors intermingle with shaded and darker colors” as she listed God’s gifts to her: “the Church, my vocation, my community of the Sisters of the Holy Cross, family members, special friends, students and co-workers.”

The “bright and dark tints of life’s joys and sorrows, separations and reunions” were threaded through ministries in education, catechetics, pastoral services, finance, teacher training and formation across continents in the countries​ of Brazil, Guatemala, Uganda and the United States. Sister Mildred Louise cautioned that the flip-side of the canvas or tapestry was a little messy after so many years, but she trusted God to give her a “gentle touch-up” before bringing this work of her life to completion.

Mildred Louise was the daughter of Mary Turner and Harry Keegan in a family of 10 children. The Keegan’s claimed Washington, D.C., as their home. “Millie” met the Sisters of the Holy Cross when she attended Saint Cecilia’s Academy on Capitol Hill and applied to the Congregation at age 19, after working for a year in a government job as a secretary.

Sister Mildred Louise may have started in 1941 as a teacher in classrooms at St. Paul’s School in New York, New York, and Chevy Chase, Maryland, but her heart was always in mission. From 1949 to 1963 she served in Brazil in every educational capacity at the Sisters of the Holy Cross Foundation in São Paulo. She was a spiritual mentor and teacher for young women being formed to consecrated life at Saint Mary’s from 1963 to 1965 and for the Association for Religious in Uganda at Jinja and Ibanda​, Mbarara, then the Banyateresa Novitiate in Fort Portal from 1968 to 1972. Sister Mildred Louise served locally in South Bend, Indiana, when she stepped in temporarily to assist the Religious Education Office for the Catholic Diocese of Fort Wayne-South Bend in 1973. She was a chaplain in Columbus, Ohio, twice at Mount Carmel Medical Center from 1974 to 1979 and 1985 to 1986.

Sister had lived at the motherhouse at Saint Mary’s since 1986, continuing to use her many gifts to foster community life. Like the old woman, Anna, in the temple, “she had served God night and day” (Luke 2:37). In 2002, Sister Mildred Louise began her full-time ministry of prayer at Saint Mary’s for the mission of the Congregation and in thanksgiving for its benefactors and friends. Sister recently celebrated her 100th birthday with the sisters and family. Every warp and woof had been filled in; the last thread cut. Surely her prayer was, as at her jubilee, “My heartfelt thanksgiving and gratitude for all, and to all, as the past and present unfold….”