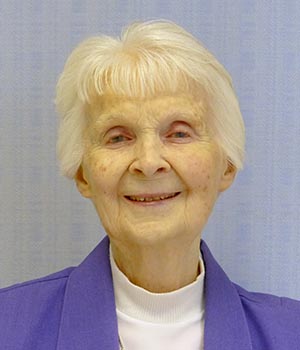 Word has been received of the death of Sister M. Gertrude Anne (Gertrude Anne Otis), CSC, who died at 11:30 a.m. on February 17, 2019, in Saint Mary’s Convent, Notre Dame, Indiana. Sister Gertrude Anne has requested a green burial. * The Reception of the Body and Rite of Final Commendation were held in the Church of Our Lady of Loretto on Monday, February 18, at 1:30 p.m., immediately followed by the procession to the gravesite and Rite of Committal at Our Lady of Peace Cemetery. Sister Gertrude Anne entered the Congregation from Washington, D.C. on February 8, 1946. Her initial profession of vows took place on August 15, 1948.

Chief Yeoman Gertrude Otis, of the United States Naval Reserve (USNR), was authorized to wear the Commendation Ribbon for meritorious services in the Headquarters of the Commander in Chief, United States Fleet, Washington D.C., from 1943 to 1945.  As secretary to the chief of Naval Operations, Otis served Admiral Ernest J. King, “the only five-star admiral at that time, the top man in the Navy,” she was fond of saying.  Seventy-two years ago, the young 23-year-old woman responded instead to another summons at the end of the Second World War and was invested with the holy habit of the Sisters of the Holy Cross at Saint Mary’s, Notre Dame, Indiana, on August 15, 1946. Upon perpetual profession of vows as a consecrated religious in 1951, Sister M. Gertrude Anne, CSC, wore a silver heart bearing the image of the Immaculate Heart of Mary, Mother of Sorrows, patroness of the Congregation. As it had been put to her by a Sister of Mercy she met by chance while still in the military, “Did you ever stop to think what it would be like working for the Commander in Chief of heaven and earth?”  Sister Gertrude Anne called this spontaneous exchange a moment of grace. “With the power of God’s grace at work, I realized on the spot that I could do no better than give my life to God in the service of His people. I was hooked by my characteristic ambition to climb to the top.”

Sister M. Gertrude Anne’s road to Damascus began in Wesley, Iowa, where she was born in 1922. The Otis family was one of about 125 households in the northern rural area bordering Minnesota. Both parents were Catholic. Joseph Otis was a farmer, who died when Gertrude was a child. Her widowed mother, Mary Schwiderski, a housekeeper from Bavaria, Germany, had the greater influence on her spiritual formation. She was a prayerful woman who regularly invited her six children to kneel to pray together morning and night. One of Gertrude’s sisters, Mary, became a Sister of St. Joseph of Carondelet, Sister Mary Immaculate. Sister Gertrude Anne kept in touch with the children of her two brothers and three sisters over the years.

Sister Gertrude Anne was richly gifted by nature and grace, coming from that strong, faith-filled family heritage. As a sister, she had excellent opportunities for education, with degrees from Saint Mary’s College: Bachelor’s in sacred doctrine in 1952, master’s in religion from the School of Sacred Theology in 1955, and a doctorate in sacred doctrine from the School of Sacred Theology in 1960. She had extensive experience as a college teacher and administrator serving in various capacities at Saint Mary’s College “during the golden years of Sister Madeleva’s (Sister M. Madeleva Wolff, CSC) presidency.” She was in admissions as registrar from 1950 to 1958; went to Pontifical Institute Regina Mundi in Rome on a sabbatical for the college from 1958 to 1959; taught theology and scripture from 1959 to 1967; and from 1972 to 1974 Sister Gertrude Anne developed the short-lived Tucson Program in Cortaro, Arizona. While prayer and study in the desert had a mystical attraction for its director, the students felt isolated in the arid Southwest.

From 1963 through 1966, Sister Gertrude Anne was director of novices for the Sisters of the Holy Cross during the Second Vatican Council, relishing the opportunity to immerse the novices in scripture as a foundation for their spirituality at a time of profound change, rediscovering the historical and biblical roots of the vowed life in a renewed Catholic Church.

For the next 52 years she returned to academia or roles in pastoral ministry. Sister served in various roles at Cardinal Cushing College in Brookline, Massachusetts; The Catholic University of America in Washington, D.C.; Barry University in Miami Shores, Florida; and Sacred Heart Seminary and School of Theology in Hales Corners, Wisconsin.

Sister also was drawn to pastoral care at St. Joseph’s Hospital, South Bend, Indiana, from 1976 to 1978 and Bon Secours Hospital in North Miami, Florida, from 1985 to 1987. Her former novices never knew Sister to have strong maternal instincts, yet she recalled her life in parish ministry in Spreckels, California, being filled with children at Saint Joseph’s Catholic Church from 1990 to 1992, “running into the patio for religion class, running up the aisle for the pastor’s blessing, and brightening up the parish.” Though the view from her office was that of a lettuce patch in the Salinas Valley, the Iowa native spent her days off taking in God’s glory on the Pacific Coast. She then transitioned to retreat ministry and spiritual direction from 1987 onward in such sites as St. Joseph Center in Valatie, New York; Mater Ecclesiae Center in Tiberias, Israel; and then for more than 25 years was associated with Mary’s Solitude at Saint Mary’s, Notre Dame, Indiana, until 2018.

On February 17, 2019, Sister slipped away peacefully in Saint Mary’s Convent, Notre Dame, Indiana, days after a sudden health crisis. Her former novices were well-represented at her green burial the next day at Our Lady of Peace Cemetery. The return of her body to the earth, as simply as possible, did not include any military honors at her request. Born in the heat of summer, she accepted death in winter’s chill.  “Now, beyond all seasons, she sees the face of God” (Psalm 42:2).

*Green burial is a way of caring for the dead with minimal environmental impact that aids in the conservation of natural resources, reduction of carbon emissions, protection of worker health, and the restoration and/or preservation of habitat. Green burial necessitates the use of non-toxic and biodegradable materials. A natural burial is the return of the body to the earth as simply as possible.