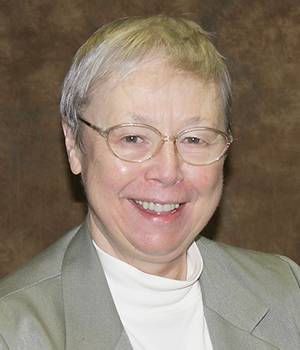 The Mass was livestreamed. Click here to view the video.

Word has been received of the death of Sister Florence Mary (May), CSC, who died at 8 a.m. on October 28, 2020, in Saint Mary’s Convent, Notre Dame, Indiana. Sister Florence entered the Sisters of the Holy Cross from Johnsburg, Illinois, on August 1, 1956. Her initial profession of vows took place on February 2, 1959.

Sister Florence Mary died during the harvest season of the American Midwest on October 28, 2020. Her memorial Mass was celebrated November 5, 2020, when Catholics remember throughout the month their family, friends and sainted companions who have died. Sister Florence Mary’s death was sudden and unexpected. At 82 years old, she was one of the younger Sisters of the Holy Cross at Saint Mary’s Convent, where she had lived since 2006. She described herself as “naturally optimistic and cheerful” and seemed to have boundless energy, though she slowed her pace in later years as she greeted sisters and employees throughout the halls of the motherhouse.

Sister freely shared that in her youth she was “sometimes impatient and stubborn” even though her pastor called her “kind and docile.” Her high school principal, recommending her to the convent, attested that she “has been an excellent student, a very fine citizen of the school body and one who has been willing to take on extra responsibilities, [who] has been dependable, honest and trustworthy.” In her early 40s, Sister Florence Mary admitted to not liking big cities and city people.

Julia or “Jewel,” was born on July 17, 1938. She was raised on a dairy farm outside the village of Johnsburg, where the Fox River runs, in northern Illinois not far from the Wisconsin state line. Her father, Irvin May, and mother, Florence Adams May, would have had a hard time of it nine years into the Great Depression when she was born. Jewel, as the eldest of four children, carried a lot of responsibility to help with chores on the 180-acre farm. No doubt she had to prod her twin sisters, Joyce and Janice, plus her brother Dennis to help with the chickens and the milking of the cows. Even with many chores, a child could experience the idylls of youth, but the parents had to face the economics of the time. By today’s standards, 30 milk cows would not be sustainable, even if the family sold the calves, eggs, fruits and vegetables to supplement their income. By the time Jewel was applying to enter the Sisters of the Holy Cross in 1956, her father was not in the best of health. Mr. and Mrs. May had begun to subdivide the farm, selling off parcels of land.

The records of the Sisters of the Holy Cross do not indicate why Jewel felt called to their religious congregation, but her motivation was unique. While most young women of the time spoke of entering the convent to know, love and serve God more perfectly and to help people, the future Sister Florence Mary wrote that her intention was “to become the best Catholic I can be and to enable others to have a Catholic education.” As Sister Florence Mary, she ministered 26 years in Catholic elementary education in Illinois, Indiana, Michigan and Wisconsin, her last 11 years as school secretary. She then served six years at the motherhouse in various capacities. Sister’s Bachelor of Education from Saint Mary’s College, Notre Dame, Indiana, in 1967 and master’s degree in reading from Cardinal Stritch College, Milwaukee, Wisconsin, in 1975 ultimately prepared her for service with the poor in Appalachia. From 1992 to 2004, she served as a reading clinician, helping adults prepare for GED exams as part of a job training program in Whitley County, Kentucky, in the cities of Williamsburg and Corbin. Other Holy Cross sisters formed a cluster of small communities in Appalachia and offered mutual support in various ministries, furthering the larger mission of building societies of justice and love.

Sister Florence Mary’s years on the dairy farm in Illinois blended with her years in Kentucky. Living at Saint Mary’s since 2006 and actively engaged in community life, she collected a harvest of memories that kept alive her love of nature and the beauty of creation. Gospel and country music soothed the soul. Direct and meaningful contact with everyday folks made one realize that we are one human family. Church is people gathered, celebrating the presence of the good God in care and compassion for one another. Sister left the Fox River and wooded acres of her youth a long time ago. She is now laid to rest in Our Lady of Peace Cemetery at Saint Mary’s, not far from the Saint Joseph River. Many saints and companions welcome her to Paradise.
We invite you to donate to the Ministry With the Poor Fund in Sister’s name.
—Written by Sister Catherine Osimo, CSC