All too soon we are here once again to commend one of our sisters to God. Sister Jane Frances, baptized Rose Mary, was born on February 2, 1930, in Lancaster, Pennsylvania, to William H. and Amelia Reus. Her mother was a homemaker and her father held various jobs during the depression at Sacred Heart Academy and St. Anthony’s grade school in Lancaster.

She had two older siblings: Charles, who was a tail gunner in World War II and after the war became a pharmacist; and Marcia, who worked in retail sales.

Rose Mary was taught by Holy Cross sisters in both grade and high school. One of her grade school classmates, Sister Vivian Mary Mastromatteo, composed “The ABCs of Sister Jane Frances.” Here is a sample of what she sent: “A is for admirable; D is devoted; F is faithful.” (Read Sister Vivian Mary’s full tribute to Jane.)

Like many of us, Jane was greatly influenced by the sisters who taught her. Sister Rita Elaine, her eighth-grade teacher, and Sister Mary Elizabeth Boyle were strong influences in her decision to become a Holy Cross sister. Rose Mary entered the Congregation on February 2, 1948, her birthday; she received the habit and the religious name, Sister Jane Frances.

Her love for music was evident at an early age when she became the pianist in grade school and later the organist at St. Anthony’s parish church from 7th grade until she left for the convent. Her love of music continued throughout her religious life.

Jane Frances’ distinctions were many. She was a teacher and principal, a pianist and organist, and, perhaps least known, an accomplished poet. She once remarked to a friend, “The easiest way for me to find God is in nature.” In her own poetry, Jane focused on her spiritual growth, grateful for God’s work that was readily available to her.

I’d like to read one of her poems, which I think captures Sister Jane’s attitude toward life as we saw her live it: She loved nature!

I passed on the road a feathery tree
And its fragrance and beauty reached out to me.
I found on the grass a butterfly wing.
And its colors bespoke a beautiful thing.
The trill of a bird in its song so sweet
Tell of God’s love in all we meet.
The beautiful blue on an insect’s wing
Is a gift of His love.
Sitting alone just thinking and seeing
Make me appreciate God’s wonder Being.
And if I share the love God gave me
I will fulfill His command of WHY He made me.

The major highlight of her active ministry years, she said, was really anything involving music, including the classes and organ lessons at Catholic University, which helped prepare her for her ministries. To see how accomplished Jane was, one has only to note that as a substitute organist, she was permitted to play in the crypt church of the Basilica of the Immaculate Conception in Washington, D.C.

The range of Jane’s impact literally stretches from the East Coast to the Midwest. Her teaching assignments extended from Washington, D.C., Maryland, Virginia, Pennsylvania and North Carolina and to the campus school here at Saint Mary’s, to Ohio, Texas and ultimately St. Paul’s in New York City. Somehow, in all of her assignments, she never quite made it beyond the Midwest to the Western states.

But her days were not filled completely with work. Simplicity was the hallmark of her life. She enjoyed life simply. Although her main gift was music, like most artists her talent extended beyond music to needlework, sewing and poetry. Like several other Sisters of the Holy Cross who were poets such as Sisters Madeleva Wolff, Dorothy Anne Cahill and Campion, Jane amassed quite a volume of poetry. Before she became so ill, Becky (Drury) and I were working with her to have her poetry published. We intend to continue this effort in tribute to her great talent.

In August of 2006, Jane came to Saint Mary’s where she received the medical treatment needed to address her serious illness. She remained here initially for two years before returning to be the organist at Saint Angela Hall in Kensington, Maryland. In 2013, she retired once again and rejoined our community here at Saint Mary’s.

When asked to reflect on one or two of her most memorable life experiences she responded: “I think my 50th jubilee year was my most memorable. That was the summer Sister Virginia Marie MacNeil and I drove to Nova Scotia and stayed with her relatives. Seeing this new country to me was so beautiful, especially driving along the Cabot Trail and seeing the picture of Virginia’s grandfather, along with Alexander Graham Bell, in the Museum in Bedeck.”

Sister Jane Frances, like many artists, was soft-spoken, introspective and deeply centered.  She saw God’s beauty and wonderment in all things and all people. She was dearly loved by her students, those she visited in her parishes, her student friends at Saint Mary’s College as well as her sisters in Holy Cross.

So, as we commend Jane to God, let me close with the words of Sister Jane Frances herself:

To you dear friend across the sea
My fondest wishes go out to thee.
Years have passed, fond memories of these
Joys and sorrows, struggles and ease.
Each day we get closer to our destiny,
Reach out, hands open, to what will be.
Stay close to Him – search for His will –
Drink of His love and He will refill –
May this new day be a joyous rebirth
To one who travels this God-made earth,
My parting request – thus may it be,
Dear friend in Christ, remember me.

I’m certain we will remember Jane as she enters the kingdom!

Written by Frances B. O’Connor, CSC 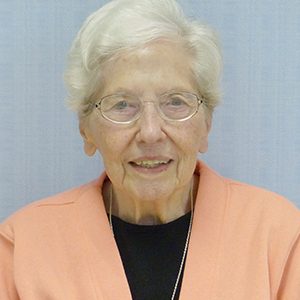