Sister Catherine Osimo, CSC, shared this Reflection After the Word at the January 17, 2021, Mass at the Church of Our Lady of Loretto, Saint Mary’s, Notre Dame, Indiana.

Here at Saint Mary’s in the Church of Our Lady of Loretto, the Blessed Sacrament is reserved in a wooden tabernacle nested on a hand-carved pedestal of what appear to be large branches. Sister Linda Kors, CSC, sketched the design for the pedestal and the tabernacle door faced with the silhouette of a mighty tree. In 1931, the superior general of the Congregation of Holy Cross, Father James W. Donahue, CSC, was reviving interest in Father Basil Anthony Moreau as founder of the congregations of Holy Cross. Father Donahue compared a founder to the trunk and roots of a tree. If we were to be cut off from the founder, the members would be deprived of the life-giving sap of divine grace.

Ninety years later, acknowledgement of Moreau as founder has long been established. Some of you here helped organize the pilgrimage to Le Mans, France, and were present there for the beatification of Blessed Basil Anthony Moreau in September 2007. Today’s readings are particular to this feast and to the man we celebrate, whose death was January 20, 1873.

Father Moreau’s commitment to building up the body of Christ

The first reading from Isaiah 52:7-10 would have us see Moreau as a prophetic figure. The words of Isaiah are joyful and upbeat, announcing restoration, comfort and redemption rather than ruin. The prophet is one who speaks the word of God to the people and is also the one who expresses or mediates the heartache of the people to God. If we are to learn from Moreau our founder, then we realize that we as consecrated religious are called to be that man or woman in the middle if we are to be transforming life and love for others.

The second reading from Ephesians 4:1-7, 11-13 calls attention to the qualities of an apostle. Father Moreau may never have been imprisoned like Paul the Apostle, but he suffered crushing obstacles, profound disappointments and rejection from the congregation he founded. Moreau’s biographers provide ample evidence that he had the gifts Saint Paul said were needed to build up the body of Christ. He was a zealous priest, a brilliant professor, a dynamic preacher and a gifted organizer. He was also humble and forgiving, always striving to preserve the unity of the spirit through the bond of peace.

The Gospel from Matthew 16:24-27 summons us to take up the cross and follow Jesus. It is well documented that Moreau had a deep spirit of prayer, that he was very self-disciplined to the point of utter self-denial. He worried about being a self-centered or selfish person, especially as a priest. In every way he knew he was not Christ but was called to be a Christ figure focused on serving others.

Here I turn away from Blessed Basil Moreau the founder to Basil Moreau as a human being: not a statue, not a stern portrait staring at us hanging on the wall. Suppose we listen to the gospel of his life, especially as a young man when he signed his letters to his biological family as “Your brother Basil.” This week on January 20, via the computer, seven young women across the globe will be received into the International Novitiate. How might the novices-elect, as well as the rest of us women of Holy Cross, connect with the young priest whose preferred signature was simply “Moreau”? We older sisters still pray that God give us the joy of our youth. Might we all find encouragement from the letters which the young Moreau wrote? What was he like as a young man?

The road to religious life

Basil Anthony Moreau came from a large family. He was the ninth of 14 children. His mother was Louise Pioger, a farmer’s daughter. Louise cultivated the family’s piece of land and its fertile soil to subsidize her husband’s income. Louis Moreau was a 43-year-old wine merchant when Basil Anthony was born on February 11, 1799, in the small village of Laigné-en-Belin, south of Le Mans, France. It was the seventh year of the revolution when Napoleon Bonaparte was fighting in Egypt and Syria in the name of the French Republic. Louis did not know how to write a letter, let alone how to sign his name. Of his 14 children, three died as infants. Those were hard times of insecurity and financial instability. The rural people were able to survive, just barely. Basil’s job was to take the cows to and from the pasture. As a boy Basil had played priest, even delivering sermons to his mother and sisters. From such families the Church was reborn in the 19th century. Basil seemed closest to his sisters Cécile, Victoire and Marie.

The young Moreau entered the nearby minor seminary at 15 years old with the financial assistance of an older woman in the village. We have a few letters from a homesick Basil, who wrote to his sisters Cécile and Victoire when he was 17 years old, his second year of the minor seminary. He mentions Cecile’s recent feast day. “Far from being a day of rejoicing, your feast day was for me only a day of sorrow. The farther I am away from you, the deeper is my attachment and the affection I feel for you, and for my brothers and sisters. When I pray for you, I get a little sad knowing the pain I caused by leaving home. I experience sentiments I have never known before. But I am also drawn to a life of prayer and to grow in virtue as an interior man. I am torn between a life of solitude in the desert and the warmth of home and family.”

Basil confides to his sister Victoire, “I can say that if you cried when I went away, I was not far from it myself, and I am not yet entirely consoled.” To his older sister Marie, who is having difficulties, he tells her he is unable to help her because of his own call. Then he asks a big favor of Victoire, “Make things easy for our good mother, for she needs to have her work lightened.” Each of the siblings has their own destiny and path to adulthood, psychologically and spiritually. He knows this innately. He keeps his perspective and focus on his vocation in this life and when all will be united as a family in the next.

Growing in faith and vocation

At 23 years old he transferred to the major seminary, the Solitude of Issy, even farther away from home. Fewer siblings are left at home, off to marriage and establishing families of their own. Those sisters left at home care for their parents. He writes less and less as he grows in his vocation but remains connected with them. “How well our parents raised us when we were children and taught us in our youth! One day we will be orphans and so many neighbors and friends are already gone. Oh, dear sister, what a flimsy thing life is! How foolish we would be to become attached to a world which so quickly fades away and slips from our hands! Don’t think I am sad and gloomy. Absolutely not! You will find me in good spirits, but a little thin, because I have lost weight. But I am well, just the same, and hope to be better still when I get back home to Laigné. I embrace papa and mama. A hearty handshake to all my brothers and sisters. Your brother Basil.”

His mother died at 59 years old, probably worn out having brought 14 children into the world. By all accounts both his parents were pious and devout. At 26 years old he wrote of his mother’s death to a spiritual mentor at the seminary, saying, “She had already borne crosses for so long, thus walking in the footsteps of Jesus Christ. She had great devotion to Our Lady and appeared to die peacefully. She remained conscious to the end and, as she died, her eyes were fixed on me for the last time. She repeated three times after me ‘Into your hands, O Lord.’ I did not know what it meant to lose a mother who sacrificed herself for her children, but now I know. It seems to me that I have no other reason for wanting to live than to console those who are left, and to work ever more zealously at becoming an interior man. When will I be with my mother again?”

Five years later his father died. Basil would have been 31 years old. His father was blind the last five years of his life but seems to have had a sense of humor as Basil and his siblings prayed at the bedside of their father. Louis Moreau was conscious to the end and joked that he hoped God would find him some forgotten corner in heaven. As a priest Basil was comforted knowing that he had been able to lead the prayers for the dying and to bring his father Communion. It was especially meaningful when his father asked him to “put my little crucifix on me,” as he told his children that he was going back to God.

As stated earlier, we have fewer letters from Moreau addressed directly to the sisters, especially to us in the Indiana Province when we felt our roots were not being sufficiently nourished by the founder who visited America only once. But we always sent greetings for the feast of St. Basil on June 14. And he always wrote us back, as on June 15, 1862 (Circular Letters to the Sisters, No. 41):

“I cannot close without thanking you, my dear daughters in Jesus Christ, for the good wishes and prayers which you kindly offer me every year on my feast day. Among all the letters which I receive on this occasion, I can easily pick out yours, and especially from those Sisters who helped me so much in my trials. May you in turn count on my remembrances of this kindness and on my most affectionate devotion in life and in death. —Moreau” 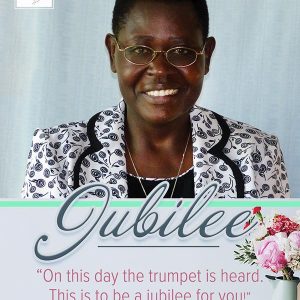 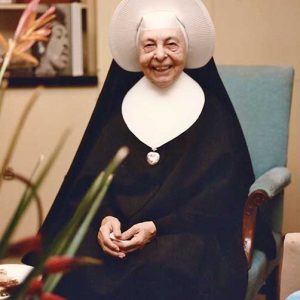 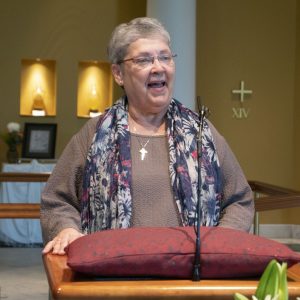 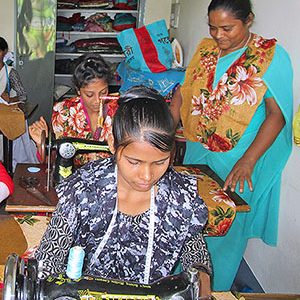 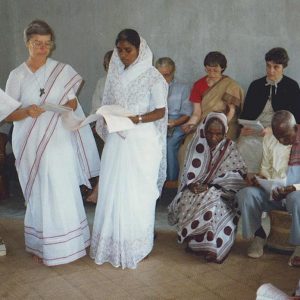 Sisters’ mission stories connect past to present Editor’s note: In honor of the 175th anniversary... 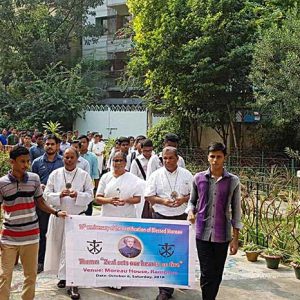 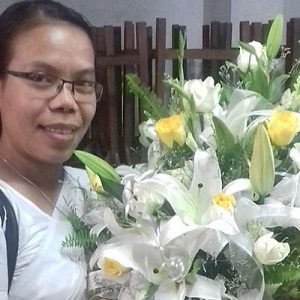 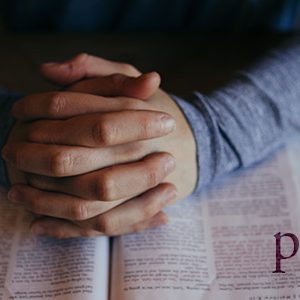 by Sister Margie Lavonis, CSC Many people get a yearly medical checkup. Lent is a...