The United States (U.S.) is facing the hottest decade on record. As a country, the U.S. has emitted more greenhouse gases than any other country on the planet.

Because the geography across the U.S. is vastly different, the impacts of climate change are vastly different in every region. The country has faced heat waves, cold waves, droughts and flooding (and more frequent coastal flooding).

The Southwest has been hit the hardest with droughts, while Alaska, in the upper northwest, has seen much warmer temperatures, causing glaciers to melt and sea levels to rise.

In addition to these extremes, the entire country is faced with an alarming crisis that Pope Francis identifies as a combination of environmental and social crises. Not only is the environment affected by climate change, but the economy and health, as well.

Due to impacts on labor and coastal properties, infrastructure, ecosystems and air quality, elder, minority, and low-income populations are truly suffering.

Current Initiatives in the United States

Conserving water in Indiana by organizing a process to save leftover drinking water from meals to water plants around the convent. In California, grassy areas in convent landscape are being replaced by drought-tolerant plants.

Building pollinator habitats is an important part of caring for creation, so sisters in Utah purchased some bee habitats and are hoping to partner with the local nature preserve to continue to do more.

Responding to the cry of the poor, novices at Saint Mary’s are ministering in the community at local non-profits and incorporating Laudato Si′ themes into their formation program, including growing their own vegetables in their campus garden. 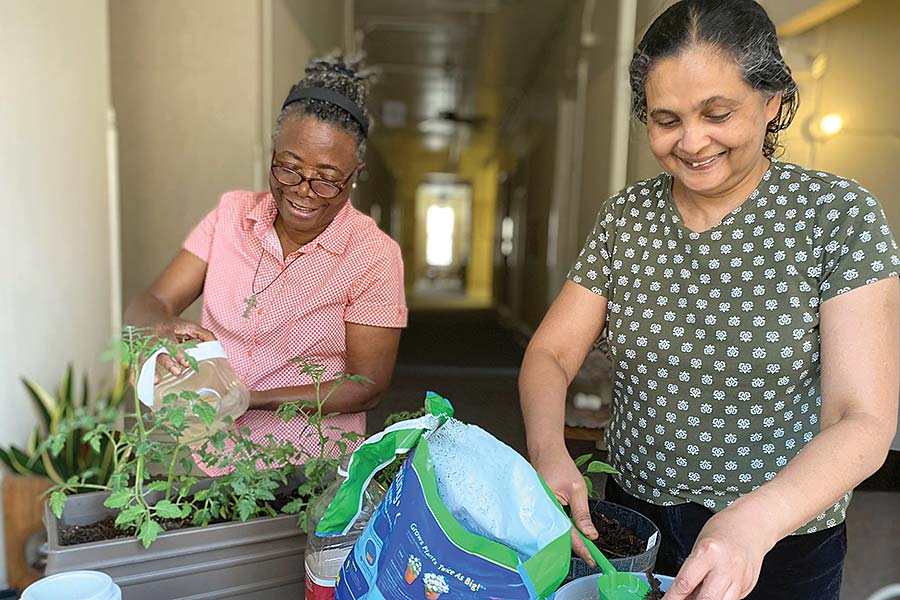 Response to the Cry of the Poor

Hold social or ecological action days in communities where possible.

Response to the Cry of the Earth

When possible, and as appliances need to be replaced, install efficient appliances in convents.

When possible, highlight
Laudato Si′ themes and updates in our internal communications.

During Lent, donate to a project that creates equitable social systems and/or addresses the needs of vulnerable people.

Where possible, bless and commission an outdoor space as a place of prayer and/or meditation.

Encourage the use of efficient lighting in convents.

Invite membership and ministry partners to serve on a committee to provide input on Laudato Si′ initiatives.