Ghana is facing a lot of challenges with climate change brought on by environmental degradation and pollution. In the last decade, the weather patterns and duration of the rainy season and dry season have changed drastically due to climate change.

Additionally, trees are being cut down for timber and firewood and for use as charcoal. Due to excessive tree-cutting and deforestation, there are no windbreaks during heavy storms, which can wreak havoc on structures and whole communities. Creatures who depend on the trees for shelter and food also suffer. And bush burning, firewood and charcoal use also are causing air pollution.

During the 2022 rainy season, areas that historically have never flooded became flooded because of litter-clogged drains. The large drainages connecting to the sea are commonly choked by plastic waste as Ghana uses lot of plastics but recycles very little.

As a result, marginalized people and those living in poverty suffer the most because they rely on natural resources the most—yet they can’t afford to buy good land. Many end up in the slums and in the streets, where there is poor sanitation. Waterborne diseases are rampant in these flooded areas, too. It is not a good situation. Hosting radio programs to sensitize people on caring for our common home and the importance of recycling. A total of four stations in three communities are giving the sisters airtime to deliver their important messaging. 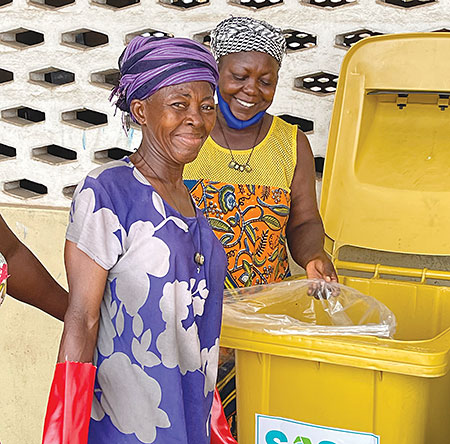 Continuing to grow SOAR (Sisters Organizing and Advancing Recycling) partnerships at various schools, churches, and parishes in Kasoa, Cape Coast, Takoradi and surrounding areas. Ongoing education and resources are shared with each partner as plastic waste is collected weekly. 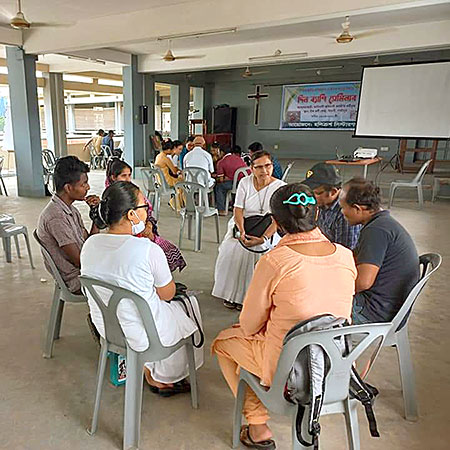 Facilitating programs for widows and widowers to help them understand their faith, social justice issues and areas of health, and offer a setting where they can share support with one another.

Response to the Cry of the Poor

We will work to eradicate pollution — especially in the areas where children study and play.

Response to the Cry of the Earth

We will make a conscious effort to collaborate more with the Ghana Forestry Commission to get more tree seedlings for planting events at parishes and schools.

We will empower communities through radio and church messaging on the
themes of Laudato Si'.

We will continue to buy from local farmers and indigenous peoples to boost their financial status.

The sisters and SOAR staff will create a space outside for people to pray with nature.

We will improve and increase community composting efforts.

The sisters and SOAR staff will create more educational activities on recycling and caring for our common home to involve the community.